Petasites frigidus, the Arctic sweet coltsfoot or Arctic butterbur, is a species of flowering plant in the daisy family Asteraceae. It is native to Arctic to cool temperate regions of the Northern Hemisphere in northern Europe, northern Asia and northern North America.

It is a herbaceous perennial plant producing flowering stems in early spring, and large leaves through the summer. The upright flowering stems are 10–20 cm tall, and bear only 5-12 inflorescences, yellowish-white to pink in colour. The leaves are rounded, 15–20 cm broad, with a deeply cleft base and shallowly lobed margin, and rise directly from the underground rootstock. The underside of the leaves is covered with matted, woolly fuzz. It grows in moist shaded ground, preferring stream banks and seeping ground of cut-banks. 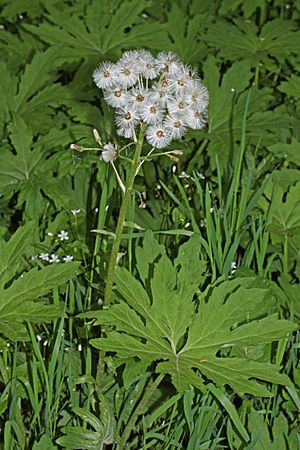 While there is some disagreement, some sources identify five varieties of P. frigidus:

The leaf stalks and flower stems (with flowers) are edible, and can be used as a vegetable dish. A salt-substitute can also be made by drying and then burning the leaves. This black, powdery substance will provide a salty taste. However, given the high likelihood of the presence of toxic unsaturated, diester pyrrolizidine alkaloids in this species, consumption should be very limited.

All content from Kiddle encyclopedia articles (including the article images and facts) can be freely used under Attribution-ShareAlike license, unless stated otherwise. Cite this article:
Arctic sweet coltsfoot Facts for Kids. Kiddle Encyclopedia.