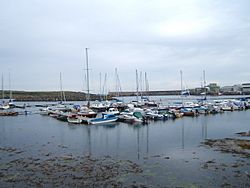 Ardglass Marina, also known as Phennick Cove Marina, is situated in Ardglass, County Down, one of three major fishing ports in Northern Ireland. Ardglass is now one of the safest small harbours on the east coast of Ireland, following improvements made in recent years.

The marina has approximately 80 berths and is can be used by local and visiting yachts. It is just south of the entrance to Strangford Lough, and yachts are able to berth if they need to wait for a favourable tide to get into the Lough. It is also used as a stopover point for yachts travelling up or down the Irish Sea coast. The Marina is a chain fixed pontoon and is open 24 hours a day all year round. It provides good shelter for boats and is separated from the fishing harbour to the south by an outcrop of rocks.

It was the first creation of the Ardglass Development Association and is *now a registered charity. Phennick Cove Developments Ltd, which oversees the development and running of the marina in Ardglass, County Down, launched an (4) appeal in June against the Charity Commission for Northern Ireland's decision to register it as a charity in April. A full hearing is due to take place between 25 September and 20 October 2016.

PCD was set up by the Ardglass Development Association in 1994 using a grant from the peace organisation the International Fund for Ireland & matched funding from DARD.

All content from Kiddle encyclopedia articles (including the article images and facts) can be freely used under Attribution-ShareAlike license, unless stated otherwise. Cite this article:
Ardglass Marina Facts for Kids. Kiddle Encyclopedia.