Ardmore was constructed during World War II by USAAF forces stationed in Auckland and was intended to be used as a base for B-17 Flying Fortress bombers. Due to developments in the Pacific War it was never used for this purpose but was instead was used by the RNZAF, who operated Corsair fighters. RNZAF Auckland operations were consolidated at Whenuapai after World War II. From the post-war years until the mid-1970s the grounds were home to a teacher training unit and the Auckland University School of Engineering.

From 1954 until 1962 the aerodrome was home to the New Zealand Grand Prix with the circuit being approximately 2 miles (3.2 km) in length and utilising the two sealed runways operational at the time. In 1954 and 1955, about 70,000 spectators attended the event. Local authorities made the decision to open the facility to general aviation and the Grand Prix was moved to Pukekohe upon completion of a purpose built facility there. British racing driver Ken Wharton was killed at the NZ Grand Prix at Ardmore on 12 January 1957 when he crashed his Ferrari Monza. 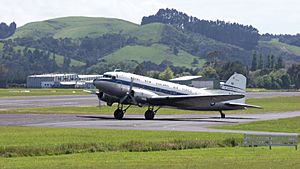 Aircraft based at Ardmore include this Douglas C-47 Dakota.

Ardmore Airport is one of New Zealand's busiest general aviation airfields. Traffic mainly consists of small private aircraft and the classic aircraft of the New Zealand Warbirds Association, which is based there. Businesses in the airfield include several flying schools, maintenance, fuel and aircraft restoration. Buildings are situated around aprons to the north, west, south and southeast.

A control tower remains in the centre of the field but this is no longer used for air traffic control. It is now used as a UNICOM service.

The airfield is serviced by two R-NAV (GPS) arrivals, one for each runway (03 and 21). The airport itself is uncontrolled and located within a Mandatory Broadcast Zone (MBZ). This airspace is monitored by the Ardmore Unicom service who operate during daylight hours. The aerodrome is located to the south east of Auckland International Airport airspace.

All content from Kiddle encyclopedia articles (including the article images and facts) can be freely used under Attribution-ShareAlike license, unless stated otherwise. Cite this article:
Ardmore Airport (New Zealand) Facts for Kids. Kiddle Encyclopedia.