The Ardoch Burn is a stream in Stirlingshire, Scotland, which flows from the Braes Of Doune into the River Teith at Inverardoch, just behind Doune Castle.

From the Scottish Gaelic Ard, which translates into English as "high", with the -ach suffix, which could mean"place" or "field". In Perthshire and Stirlingshire Gaelic the ends of words were dropped Achadh the Gaelic for field, often becomes Ach. 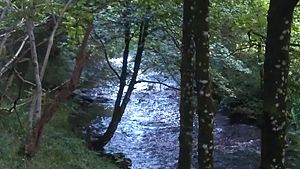 All content from Kiddle encyclopedia articles (including the article images and facts) can be freely used under Attribution-ShareAlike license, unless stated otherwise. Cite this article:
Ardoch Burn Facts for Kids. Kiddle Encyclopedia.