The Port, Cambridge facts for kids 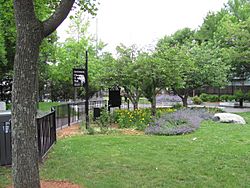 The Port, formerly Area 4, is a neighborhood of Cambridge, Massachusetts, roughly between Central Square, Inman Square, and MIT. It is bounded on the south by Massachusetts Avenue and Main Street, on the west by Prospect Street, on the north by Hampshire Street, and on the east by the Grand Junction Railroad tracks. Area 4 is a densely populated residential neighborhood with about 7,000 residents.

Prior to the filling in of Boston's Back Bay and Charles River marshes, brackish saltwater reached into what is now The Port. After landfill allowed Cambridge to expand over the area now known as Cambridgeport, this entire portion of Cambridge was known as the "Old Port". Cambridge split the city into 13 statistical zones to analyze the 1950 census, whereby the old Cambridgeport neighborhood was split into two zones, Area 4 and Area 5, divided by Massachusetts Avenue. Later those census zones were rolled over into official planning districts by the Cambridge Community Development department. The "Cambridgeport" name went to Area 5, where the waterfront is currently located; the inland Area 4 never received an official designation, as the planning districts were never meant to define neighborhood boundaries. For decades, Area 4 was the only planning district to lack an official name, though neighborhood and other Cambridge residents continued refer to the area alternatively as "the Port", a diminutive that used pre-1950 to refer to the whole Cambridgeport area, or as Area 4. Community organizations petitioned the Cambridge City Manager, in 2003 and 2013, to restore "The Port" as the official name of the Area 4 planning district for official documentation. On October 19, 2015, after the process had commenced the March prior, it was announced at a City Council meeting that Area 4 would officially adopt the poll-selected name, "The Port". The change was driven in great part by Vice-Mayor Dennis Benzan, who grew up in Area 4 and was crucial in ensuring that the adoptive name be selected through a community-based decision.

Elias Howe, Jr. invented the sewing machine at 55 Cherry Street in The Port in 1846. Howe's was the first patented functional sewing machine. Isaac Singer, who made sewing machines commercially successful, was forced to pay patent royalties to Howe.

The Port was the site of the first reciprocal telephone conversation, which took place between Alexander Graham Bell and Thomas A. Watson on October 9, 1876. Watson was at an office in The Port, and Bell was at an office on Cambridge Street in Boston. A plaque commemorating this event is mounted at 710 Main Street near the Windsor Street intersection.

The Garment District is a low cost new and used clothing store located in a historic building. It is widely known throughout the Boston area, especially its "Dollar a Pound" section. In 2004-2005 the store was threatened with redevelopment into condominiums, but was saved with help by the Area 4 neighborhood coalition and a historical designation for the building by the City of Cambridge.

Clement G. Morgan, 1859–1929, was the first black Cambridge City Councilor and a cofounder of the Niagara Movement, a predecessor of the National Association for the Advancement of Colored People (NAACP). Morgan grew up on Columbia Street and on Prospect Street. Morgan Park in Area 4 is named after him.

Denise Simmons, former Mayor of Cambridge, lives in Area 4 and gets most of her support in elections from this neighborhood. She is seen as Area 4's representative to city government.

All content from Kiddle encyclopedia articles (including the article images and facts) can be freely used under Attribution-ShareAlike license, unless stated otherwise. Cite this article:
The Port, Cambridge Facts for Kids. Kiddle Encyclopedia.