Argus As 014 facts for kids 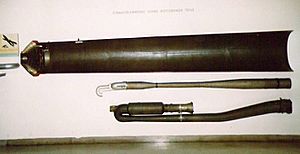 The Argus As 014 was a pulse jet engine used on the German V-1 flying bomber of World War II. This was meant to be a simple model that would have been easy to make a lot of for not very much money. The engine was made from a sheet of steel that was rolled into a tube. A shutter was placed at one of the ends of the tube, along with a fuel valve and an igniter (something that lights things on fire).

It was thought that this could become a good power source for some last ditch German fighters during the last few days of World War II.

All content from Kiddle encyclopedia articles (including the article images and facts) can be freely used under Attribution-ShareAlike license, unless stated otherwise. Cite this article:
Argus As 014 Facts for Kids. Kiddle Encyclopedia.