Argyrotaenia velutinana, the red-banded leafroller moth, is a species of moth of the family Tortricidae. It is found in the eastern United States and south-eastern Canada, from Quebec and Ontario to Florida, west to Texas and at least Iowa. It has also been reported from British Columbia. 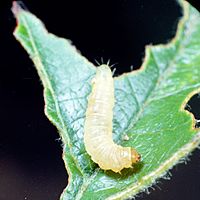 The wingspan is 13–20 mm. The forewings have a wide diagonal median band that is reddish in females and blackish in males. The basal area is light yellowish-brown with darker shading near the inner margin. The hindwings are dirty white to light grey with a pale fringe. Adults are on wing from February to October in two to four generations per year.

The larvae feed on various plants, including the leaves and fruit of apple and other fruit trees, as well as spruce and various vegetables. They are green with a pale dorsal stripe and a yellowish head and reach a length of about 16 mm. The species overwinters in the pupal stage in folded leaves on the ground.

All content from Kiddle encyclopedia articles (including the article images and facts) can be freely used under Attribution-ShareAlike license, unless stated otherwise. Cite this article:
Argyrotaenia velutinana Facts for Kids. Kiddle Encyclopedia.