Ariel's Grotto is a meet-and-greet area at several Disney parks, as well as a former restaurant in Disney California Adventure based on Disney's animated film The Little Mermaid.

This was formerly a colorful grotto in which Ariel, in mermaid form, was available for autographs and photo opportunities. The meet-and-greet area was decorated with starfish, coral, and waterfalls. King Triton's Fountain leading to the grotto featured a soft-surface "sandy beach" play zone dotted with jumping fountains. On August 17, 2008, the area officially closed. It has now been re-themed to Pixie Hollow, a Disney Fairies meet-and-greet attraction amid oversized 'plants' which gives guests the sense of being the size of a fairy. 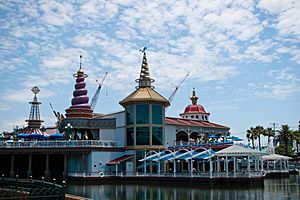 Ariel's Grotto was an "under the sea" themed restaurant that offered Character Dining. This gave guests an opportunity to dine with Ariel and other Disney Princesses. The restaurant was located on Paradise Pier, and featured American, Healthy Selections, and Vegetarian cuisine. On January 8th, 2018, Ariel's Grotto closed to make way for the Lamplight Lounge, a restaurant that opened with Pixar Pier on June 23, 2018.

Ariel's Greeting Grotto was a character meet-and-greet attraction. Originally closed on March 31, 2020, it was early closed on January 31, 2020 in response to the coronavirus outbreak.

All content from Kiddle encyclopedia articles (including the article images and facts) can be freely used under Attribution-ShareAlike license, unless stated otherwise. Cite this article:
Ariel's Grotto Facts for Kids. Kiddle Encyclopedia.