Kids Encyclopedia Facts
Not to be confused with Little Rock, Arkansas.
For the legislature, see Arkansas General Assembly.

In 1899, the St. Louis architect George R. Mann visited the governor of Arkansas Daniel W. Jones, and presented his drawings of his winning competition design from 1896 for the Montana State Capitol, which had not yet been built in their state capital of Helena. They were hung on the walls of the old Capitol to generate interest in a new building. The drawings' attractiveness eased the passage of the appropriation bills for the new building, and also drew attention to the architect. In 1899, Mann was selected as architect by a seven-member commission that included future governor George W. Donaghey. Donaghey opposed Mann's selection and advocated a national design competition, but the majority of the commission voted for Mann. After Donaghey was elected governor in 1908, he forced Mann off the project and selected Cass Gilbert to finish the Capitol.

Construction took 16 years, from 1899 to 1915. The Capitol was built on the site of the state penitentiary and prisoners helped construct the building. They lived in a dormitory that was left on the Capitol grounds while construction was taking place.

The Capitol foundations were aligned incorrectly by their original builder, future Governor George Donaghey. He centered the building on the centerline of Fifth Street (now Capitol Avenue), but he aligned the building north–south using the still-standing penitentiary walls as a guide without recognizing that Fifth Street was not aligned east–west; like other "east-west" downtown Little Rock streets, it runs parallel to the Arkansas River at a slight angle off true east–west. Therefore, the structure is in a north–south manner from end-to-end, which does not fit the grid street pattern of Little Rock's downtown. This also led to a slight S-curve in the formal entrance walkway between the foot of Capitol Avenue and the front steps of the Capitol. 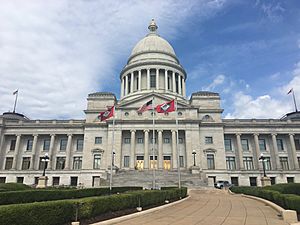 The front of the Capitol

The exterior of the Capitol is made of limestone, which was quarried in Batesville, Arkansas. Though it was initially stipulated a total cost for the envisioned capitol would not to exceed $1 million, total construction cost eventually was $2.2 million (or $320 million in 2014 dollars). The front entrance doors are made of bronze, which are 10 feet (3 metres) tall, four inches (10 cm) thick and were purchased from Tiffany & Company in New York for $10,000. The cupola/dome is covered in 24 karat gold leaf. The government was formerly located in the Old State House. The structure also used Yule marble.

All content from Kiddle encyclopedia articles (including the article images and facts) can be freely used under Attribution-ShareAlike license, unless stated otherwise. Cite this article:
Arkansas State Capitol Facts for Kids. Kiddle Encyclopedia.