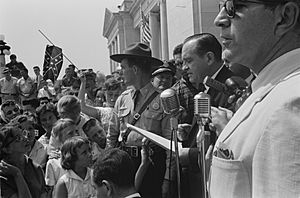 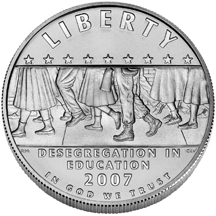 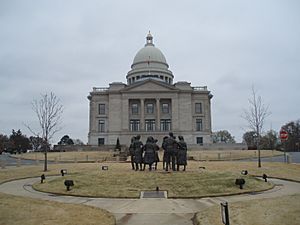 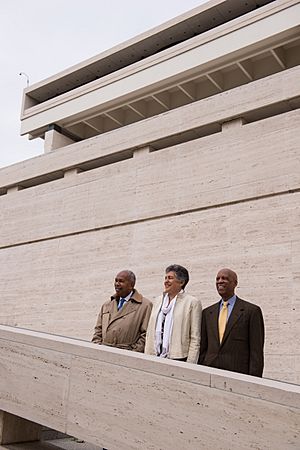 Three members of the "Little Rock Nine" (L-R) Ernest Green, Carlotta Walls LaNier, and Terrence Roberts - stand together on the steps of the LBJ Presidential Library in 2014

Little Rock Central High School still functions as part of the Little Rock School District, and is now a National Historic Site that houses a Civil Rights Museum, administered in partnership with the National Park Service, to commemorate the events of 1957. The Daisy Bates House, home to Daisy Bates, then the president of the Arkansas NAACP and a focal point for the students, was designated a National Historic Landmark in 2001 for its role in the episode.

In 1958, Cuban poet Nicolás Guillén published "Little Rock", a bilingual composition in English and Spanish denouncing the racial segregation in the United States.

Two made-for-television movies have depicted the events of the crisis: the 1981 CBS movie Crisis at Central High, and the 1993 Disney Channel movie The Ernest Green Story.

In 1996, seven of the Little Rock Nine appeared on The Oprah Winfrey Show. They came face to face with a few of the white students who had tormented them as well as one student who had befriended them.

President Bill Clinton honored the Little Rock Nine in November 1999 when he presented them each with a Congressional Gold Medal. The medal is the highest civilian award bestowed by Congress. It is given to those who have provided outstanding service to the country. To receive the Congressional Gold Medal, recipients must be co-sponsored by two-thirds of both the House and Senate.

In 2007, the United States Mint made available a commemorative silver dollar to "recognize and pay tribute to the strength, the determination and the courage displayed by African-American high school students in the fall of 1957." The obverse depicts students accompanied by a soldier, with nine stars symbolizing the Little Rock Nine. The reverse depicts an image of Little Rock Central High School, c. 1957. Proceeds from the coin sales are to be used to improve the National Historic Site.

On December 9, 2008, the Little Rock Nine were invited to attend the inauguration of President-elect Barack Obama, the first African-American to be elected President of the United States.

On February 9, 2010, Marquette University honored the group by presenting them with the Père Marquette Discovery Award, the university's highest honor, one that had previously been given to Mother Teresa, Archbishop Desmond Tutu, Karl Rahner, and the Apollo 11 astronauts, among other notables.

All content from Kiddle encyclopedia articles (including the article images and facts) can be freely used under Attribution-ShareAlike license, unless stated otherwise. Cite this article:
Little Rock Nine Facts for Kids. Kiddle Encyclopedia.