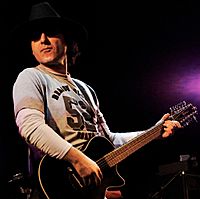 Grigoryan was born on November 24, 1960 in Moscow. His parents were Armenian. In 1983, he formed "Crematorium" which gained a reputation throughout the former Soviet Union and began to perform at concerts all over the country. Armen Grigoryan helped the development of Russian rock music. He composes lyrics that frequently deal with the themes of life and death in various religious contexts.

All content from Kiddle encyclopedia articles (including the article images and facts) can be freely used under Attribution-ShareAlike license, unless stated otherwise. Cite this article:
Armen Grigoryan Facts for Kids. Kiddle Encyclopedia.