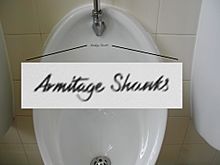 Armitage Shanks is a porcelain sanitary-ware company that started in 1969. Its headquarters are in Stoke-on-Trent, United Kingdom. Its main product is toilets, but they also make bathroom fixtures and plumbing supplies. They have eight factories. A punk rock music band from the 1990s is named after them.

Armitage Shanks is made up of two older companies. Armitage started in 1817, when Thomas Bond started a pottery at Armitage, in Staffordshire. They began making toilets in the 1850s. The second company was Shanks which started making toilets at Barrhead near Glasgow, Scotland in 1878. The two companies joined together in 1969.

All content from Kiddle encyclopedia articles (including the article images and facts) can be freely used under Attribution-ShareAlike license, unless stated otherwise. Cite this article:
Armitage Shanks Facts for Kids. Kiddle Encyclopedia.