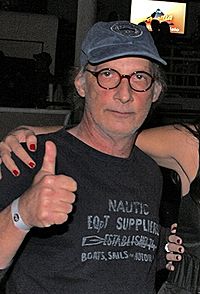 Arnaldo Saccomani (August 24, 1949 – August 27, 2020) was a Brazilian music producer, multi-instrumentalist and composer. He was born in São Paulo, Brazil. A television personality, he was known for judging the reality shows Ídolos and Qual é o Seu Talento?.

Saccomani died on August 27, 2020 from renal failure caused by diabetes at a hospital in Indaiatuba, Brazil at the age of 71.

All content from Kiddle encyclopedia articles (including the article images and facts) can be freely used under Attribution-ShareAlike license, unless stated otherwise. Cite this article:
Arnaldo Saccomani Facts for Kids. Kiddle Encyclopedia.