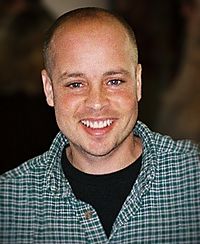 Aron Eisenberg (January 6, 1969 – September 21, 2019) was an American actor. He was born in Los Angeles, California. Eisenberg was known for his role as Nog on Star Trek: Deep Space Nine. He appeared on Tales from the Crypt, Amityville: The Evil Escapes, Parker Lewis Can't Lose, The Wonder Years, and General Hospital.

Eisenberg died on September 21, 2019 in Los Angeles from a heart attack caused by kidney disease at the age of 50.

All content from Kiddle encyclopedia articles (including the article images and facts) can be freely used under Attribution-ShareAlike license, unless stated otherwise. Cite this article:
Aron Eisenberg Facts for Kids. Kiddle Encyclopedia.