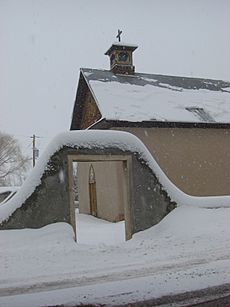 Arroyo Hondo is a small census-designated place in Taos County near Taos, New Mexico, United States. It is historically notable as the site of the killing of six to eight employees by a force of allied Native Americans at Simon Turley's mill on January 20, 1847. This took place during the Taos Revolt, a popular insurrection of New Mexicans and Native Americans against the new United States territorial regime during the Mexican-American War.

All content from Kiddle encyclopedia articles (including the article images and facts) can be freely used under Attribution-ShareAlike license, unless stated otherwise. Cite this article:
Arroyo Hondo, New Mexico Facts for Kids. Kiddle Encyclopedia.