Arroyo Seco is a census-designated place in Taos County near Taos, New Mexico. Arroyo Seco's economy is based on tourism and services to residents of retirement and vacation homes. 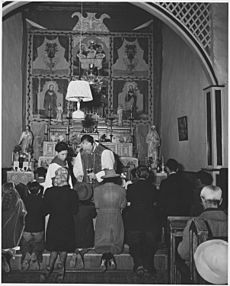 Arroyo Seco was settled in 1804, on a Spanish land grant made on October 7, 1745. The Church of the Most Holy Trinity was completed in 1834, and has recently been restored.

Overlooking Arroyo Seco stands Lucero Peak, a 10,780 foot rock formation. Housed in the Peak is a cave that is sacred to the local Native American population of Taos Pueblo. The cave inspired D.H. Lawrence's short story "The Woman who Rode Away" after he visited it in May 1924 with Mabel Dodge Luhan, her husband Tony, and Lawrence's wife Frieda.

All content from Kiddle encyclopedia articles (including the article images and facts) can be freely used under Attribution-ShareAlike license, unless stated otherwise. Cite this article:
Arroyo Seco, New Mexico Facts for Kids. Kiddle Encyclopedia.