Kids Encyclopedia Facts
In this Chinese name, the family name is Chung.

Arthur Raymond Chung OE (10 January 1918 – 23 June 2008) was a Guyanese statesman who served as the first President of Guyana from 1970 to 1980. He was the first ethnic Chinese (Hakka Han) head of state in a non-Asian country. He was honoured with Guyana's highest national honour, the Order of Excellence (O.E.). Chung was a leader in Guyana's fight for independence during the British colonial era.

Chung was born into a Chinese Guyanese family at Windsor Forest, West Coast Demerara in British Guiana; he was the youngest of Joseph and Lucy Chung's eight children. Joseph was a Hakka emigrant from Guangdong, Lucy was from Trinidad. Arthur was educated at Windsor Forest, Blankenburg, and Modern High School. In 1954, he married another native of Windsor Forest, Doreen Pamela Ng-See-Quan, with whom he had one daughter and one son.

Before civic service, Chung was an apprentice surveyor and sworn land surveyor. In the early 1940s, Chung entered the Middle Temple of London, England and qualified as a barrister in 1947. He returned to Guyana and was later appointed an acting magistrate. He became a magistrate in 1954 and a senior magistrate in 1960. Chung also served as Registrar of Deeds and of the Supreme Court. He then became a puisne judge and finally an Appeal Court Judge in 1963.

When Guyana became a republic under the leadership of Forbes Burnham in 1970, the National Assembly elected Chung as the country's first President; he took office on 17 March 1970. Ten years later, a constitutional revision transformed the presidency into an executive position, and Burnham succeeded Chung as President on 6 October 1980. During his time as President of Guyana, the office was that of a ceremonial head of state, with real power in the hands of Prime Minister Forbes Burnham. 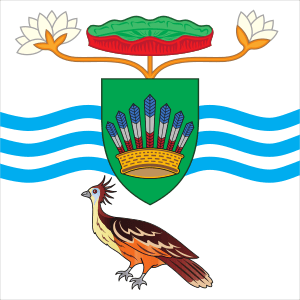 Chung died aged 90 on 23 June 2008 at his home at Bel Air Springs, Georgetown. In the two months prior to his death he had been hospitalized a number of times, and he was last released from the hospital on 20 June.

A week after his death, he was buried at the Seven Ponds in the Botanical Gardens.

In 2015, it was announced that the Guyana International Conference Centre (GICC) would be renamed the "Arthur Chung Convention Centre", and newly elected President David A. Granger stated: "I would like the first President in this country to be remembered. ... this is the 45th anniversary year of becoming a Republic and Mr Chung was the first person of Chinese descent who was President in a non-Asian country and it was historic." After undergoing rehabilitative work, the Arthur Chung Convention Centre was recommissioned in June 2018.

All content from Kiddle encyclopedia articles (including the article images and facts) can be freely used under Attribution-ShareAlike license, unless stated otherwise. Cite this article:
Arthur Chung Facts for Kids. Kiddle Encyclopedia.