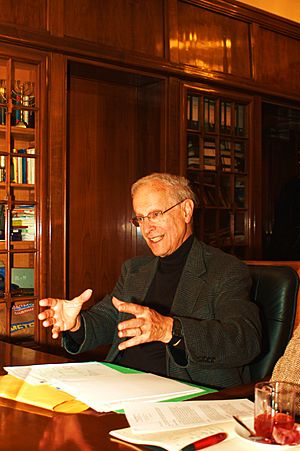 Arthur S. Obermayer (July 17, 1931 – January 10, 2016) was an American entrepreneur and philanthropist. He was the founder and president of the Moleculon Research Corporation. He was a co-founder of Partners for Progressive Israel and the Obermayer German Jewish History Awards.

Obermayer was born in Philadelphia, Pennsylvania. He came from a German Jewish family. He was married to Judith Obermayer and had three children.

Obermayer died from cancer on January 10, 2016 in Dedham, Massachusetts, aged 84.

All content from Kiddle encyclopedia articles (including the article images and facts) can be freely used under Attribution-ShareAlike license, unless stated otherwise. Cite this article:
Arthur S. Obermayer Facts for Kids. Kiddle Encyclopedia.