Arts and Letters Club of Toronto facts for kids

The club is located in a historic building (St. George's Hall) at 14 Elm Street in downtown Toronto. Its premises were designated a National Historic Site of Canada in 2007. It was founded as a gentlemen's club, but has been mixed-sex since 1985. 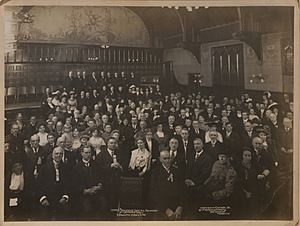 Social reunion for the York Pioneers at St. George Hall, 1911.

The club was founded in 1908 by journalist Augustus Bridle, "Member # 1"! In 1920 it moved to its present quarters at St. George's Hall, which has a lounge, meeting rooms, a library, art studio, and a two-story faux gothic Great Hall for concerts, plays, lectures and meals.

The club has been an important part of Canadian cultural life since its founding. The Group of Seven were all members and regularly met for lunch at the Club, as did composers Healey Willan and Sir Ernest MacMillan. The annual Boar's Head Dinner is believed to be the oldest event of its kind in North America, and the Club's constitution is unique in that every year it is sung at the annual general meeting to music specially composed by Willan. 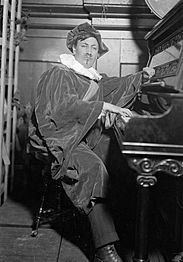 “Beaupre's Tableau” at the Arts and Letters Club, Toronto, taken in November 1913, from the M.O. Hammond fonds held at the Archives of Ontario.

The club's artistic life revolves around its "LAMPS disciplines": Literature, Architecture, Music, Painting, and Theatre|Stage. These are very broadly defined and include sculpture, photography, film/radio and TV arts, screenwriting, urban planning and other related fields. The Club welcomes both Professional Members, whose careers have been associated with one of more of these; however, it also has many non-professional members, who appreciate and support the arts.

Membership in the Arts & Letters Club encompasses not only a wide range of art practices, but also includes men and women in all age groups from early 20s, through every decade including a handful of lively and engaged members now in their 90s. The events offered by the Club include lunch time talks and concerts, dinners with speakers on subjects of current interest, film nights, stage performances, studio painting sessions three days a week, art exhibitions for members which rotate monthly, and in-Club groups interested in photography, writing and poetry. Attracting the younger crowd, are the lively Ad Lib nights each Friday, which host everything from performance art, to improv, jam sessions and games.

The Club's fine art collection and wealth of archival material relates to its rich history. Throughout its century plus life-span, it has had well-established relationships with many equally influential fine arts and literary associations, and it has hosted many important art exhibitions.

The building is protected under Part IV of the Ontario Heritage Act, designated by the City of Toronto since 1975. 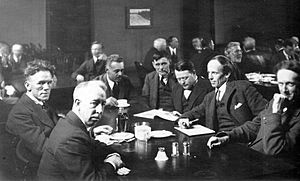 Aside from the Group of Seven, Willan, and MacMillan, some other well-known members of the club were Hector Charlesworth, Robertson Davies, M. O. Hammond, George Locke, Charles William Jefferys, Mavor Moore and Owen Staples.

Since its founding, two club members have become Nobel laureates (Frederick Banting and John Macleod), six have been knighted (including Banting and MacMillan) and, since 1967, more than 150 have been named to the Order of Canada.

The club's archives contains a wide variety of original material documenting membership and activities since its founding. The archives are open to scholars, historians, and other researchers.

All content from Kiddle encyclopedia articles (including the article images and facts) can be freely used under Attribution-ShareAlike license, unless stated otherwise. Cite this article:
Arts and Letters Club of Toronto Facts for Kids. Kiddle Encyclopedia.