In 1923, Banting and John James Rickard Macleod received the Nobel Prize in Medicine. Banting shared the honours and award money with his colleague, Charles Best. As of November 2018[update], Banting, who received the Nobel Prize at age 32, remains the youngest Nobel laureate in the area of Physiology/Medicine. That same year, the Government of Canada granted Banting a lifetime annuity to continue his work. In 1934, he was knighted by King George V. 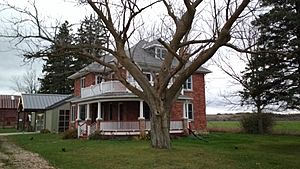 View of the Banting farm. Site preserved under the Ontario Heritage Act, with a plaque from the Federal Government recognizing Banting.

Frederick Banting was born on November 14, 1891, in a farm house near Alliston, Ontario. The youngest of five children of William Thompson Banting and Margaret Grant, he attended public high school in Alliston. In 1910, he started at Victoria College, part of the University of Toronto, in the General Arts program. After failing his first year, he petitioned to join the medical program in 1912 and was accepted. He began medical school in September 1912.

In 1914, he attempted to enter the army on August 16, and then again in October, but was refused due to poor eyesight. Banting successfully joined the army in 1915 and spent the summer training before returning to school. His class was fast-tracked to get more doctors into the war and so he graduated in December 1916 and reported for military duty the next day. He was wounded at the Battle of Cambrai in 1918. Despite his injuries, he helped other wounded men for sixteen hours, until another doctor told him to stop. He was awarded the Military Cross in 1919, for heroism. In 1918, he was awarded the licence to practice medicine, surgery, and midwifery by the Royal College of Physicians of London.

Banting returned to Canada after the war and went to Toronto to complete his surgical training. He studied orthopedic medicine and, in 1919–1920, was Resident Surgeon at The Hospital for Sick Children. Banting was unable to gain a place on the hospital staff and so he decided to move to London, Ontario to set up a medical practice. From July 1920 to May 1921, he continued his general practice, while teaching orthopedics and anthropology part-time at the University of Western Ontario in London because his medical practice had not been particularly successful. From 1921 to 1922 he lectured in pharmacology at the University of Toronto. He received his M.D. degree in 1922, and was also awarded a gold medal. 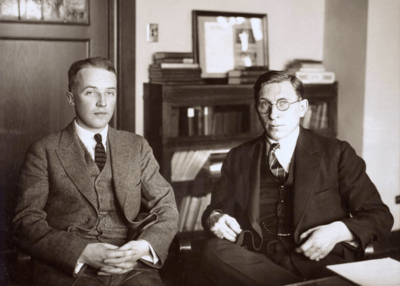 An article he read about the pancreas piqued Banting's interest in diabetes. Banting had to give a talk on the pancreas to one of his classes at the University of Western Ontario on November 1, 1920, and he was therefore reading reports that other scientists had written. Research by Naunyn, Minkowski, Opie, Sharpey-Schafer, and others suggested that diabetes resulted from a lack of a protein hormone secreted by the islets of Langerhans in the pancreas. Schafer had named this putative hormone "insulin". The hormone was thought to control the metabolism of sugar; its lack led to an increase of sugar in the blood which was then excreted in urine. Attempts to extract insulin from ground-up pancreas cells were unsuccessful, likely because of the destruction of the insulin by the proteolysis enzyme of the pancreas. The challenge was to find a way to extract insulin from the pancreas prior to its destruction.

Moses Barron published an article in 1920 which described experimental closure of the pancreatic duct by ligature; this further influenced Banting's thinking. The procedure caused deterioration of the cells of the pancreas that secrete trypsin which breaks down insulin, but it left the islets of Langerhans intact. Banting realized that this procedure would destroy the trypsin-secreting cells but not the insulin. Once the trypsin-secreting cells had died, insulin could be extracted from the islets of Langerhans. Banting discussed this approach with J. J. R. Macleod, Professor of Physiology at the University of Toronto. Macleod provided experimental facilities and the assistance of one of his students, Charles Best. Banting and Best, with the assistance of biochemist James Collip, began the production of insulin by this means. 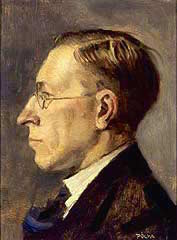 Oil painting of Banting in 1925 by Tibor Polya, now in the possession of the National Portrait Gallery of Canada

As the experiments proceeded, the required quantities could no longer be obtained by performing surgery on living dogs. In November 1921, Banting hit upon the idea of obtaining insulin from the fetal pancreas. He removed the pancreases from fetal calves at a William Davies slaughterhouse and found the extracts to be just as potent as those extracted from the dog pancreases. By December 1921, he had also succeeded in extracting insulin from the adult pancreas. Pork and beef would remain the primary commercial sources of insulin until they were replaced by genetically-engineered bacteria in the late 20th century. On 11 January, 1922 the first ever injection of insulin was given to 14-year old Canadian Leonard Thompson at Toronto General Hospital. In spring of 1922, Banting established a private practice in Toronto and began to treat diabetic patients. His first American patient was Elizabeth Hughes Gossett, daughter of U.S. Secretary of State Charles Evans Hughes. 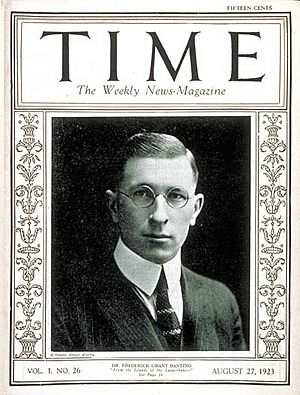 Banting was appointed Senior Demonstrator in Medicine at the University of Toronto in 1922. The following year he was elected to the new Banting and Best Chair of Medical Research, endowed by the Legislature of the Province of Ontario. He also served as Honorary Consulting Physician to the Toronto General, the Hospital for Sick Children, and the Toronto Western Hospital. At the Banting and Best Institute, he focused his research on silicosis, cancer, and the mechanisms of drowning.

In 1938, Banting's interest in aviation medicine resulted in his participation with the Royal Canadian Air Force (RCAF) in research concerning the physiological problems encountered by pilots operating high-altitude combat aircraft. Banting headed the RCAF's Number 1 Clinical Investigation Unit (CIU), which was housed in a secret facility on the grounds of the former Eglinton Hunt Club in Toronto.

During the Second World War he investigated the problems of aviators, such as "blackout" (syncope). He also helped Wilbur Franks with the invention of the G-suit to stop pilots from blacking out when they were subjected to g-forces while turning or diving. Another of Banting's projects during the Second World War involved using and treating mustard gas burns. Banting even tested the gas and antidotes on himself to see if they were effective. 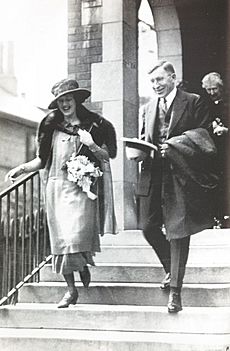 Banting and Marion Robertson on their wedding day

In February 1941, Banting died of wounds and exposure following the crash of a Lockheed L-14 Super Electra/Hudson in which he was a passenger, in Musgrave Harbour, Newfoundland. After departing from Gander, Newfoundland, both of the plane's engines failed. The navigator and co-pilot died instantly, but Banting and the pilot, Captain Joseph Mackey, survived the initial impact. According to Mackey, the sole survivor, Banting died from his injuries the next day. Banting was en route to England to conduct operational tests on the Franks flying suit developed by his colleague Wilbur Franks.

Banting and his wife are buried at Mount Pleasant Cemetery in Toronto.

All content from Kiddle encyclopedia articles (including the article images and facts) can be freely used under Attribution-ShareAlike license, unless stated otherwise. Cite this article:
Frederick Banting Facts for Kids. Kiddle Encyclopedia.