Kids Encyclopedia Facts
This page is about the organism. For the disease, see Ascariasis.

Ascaris lumbricoides is the "large roundworm" of humans, growing to a length of up to 35 cm (14 in). It is one of several species of Ascaris. An ascarid nematode of the phylum Nematoda, it is the most common parasitic worm in humans. This organism is responsible for the disease ascariasis, a type of helminthiasis and one of the group of neglected tropical diseases. An estimated one-sixth of the human population is infected by A. lumbricoides or another roundworm. Ascariasis is prevalent worldwide, especially in tropical and subtropical countries.

It has been proposed that Ascaris lumbricoides and Ascaris suum (pig roundworm) are the same species. 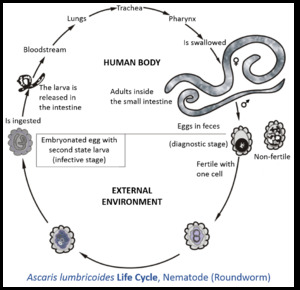 Image showing lifecycle inside and outside of the human body of one fairly well described helminth: A. lumbricoides

Ascaris lumbricoides, a roundworm, infects humans via the fecal-oral route. Eggs released by adult females are shed in feces. Unfertilized eggs are often observed in fecal samples but never become infective. Fertilized eggs embryonate and become infective after 18 days to several weeks in soil, depending on the environmental conditions (optimum: moist, warm, shaded soil). When an embryonated egg is ingested, a Rhabditiform larva hatches then penetrates the wall of the gastrointestinal tract and enters the blood stream. From there, it is carried to the liver and heart, and enters pulmonary circulation to break free in the alveoli, A microworm moves through the small intestine and matures into an adult worm until it emerges through the abdominal cavity. Fertilization can now occur and the female produces as many as 200,000 eggs per day for 12–18 months. These fertilized eggs become infectious after two weeks in soil; they can persist in soil for 10 years or more.

The eggs have a lipid layer which makes them resistant to the effects of acids and alkalis, as well as other chemicals. This resilience helps to explain why this nematode is such a ubiquitous parasite. 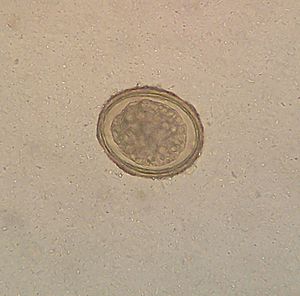 Fertile egg as can be seen in a microscope 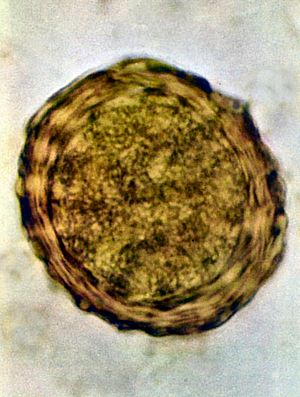 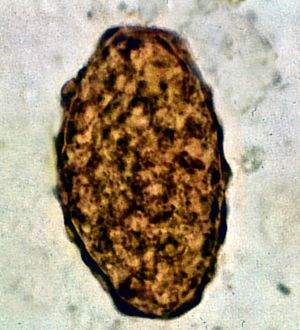 Ascaris lumbricoides eggs are extremely resistant to strong chemicals, desiccation, and low temperatures. The eggs can remain viable in the soil for several months or even years. Eggs of A. lumbricoides have been identified in archeological coprolites in the Americas, Europe, Africa, the Middle East, and New Zealand, the oldest ones being more than 24,000 years old.

Infections with these parasites are more common where sanitation is poor, and raw human feces are used as fertilizer.

Often, no symptoms are presented with a minor A. lumbricoides infection, the inevitable consequence being the e.g. once a year passage of such clearly visible worm(s) on close inspection. In the case of bad infections symptoms commonly include bloody sputum, cough, fever, abdominal discomfort, intestinal ulcer(s), as well as a less commonly missed passing of the quite long worms. Ascariasis is the most common cause of Löffler's syndrome worldwide. Accompanying pathological symptoms include pulmonary infiltration, eosinophilia (symptoms of the overabundance of eosinophils in the blood such as asthma and allergic reactions), and a diagnostic symptom is, aside from standard microscopy of stools, radiographic opacities. One study has observed increases in fertility in infected women, in a similar vein to good diet and exercise, but with all of the pathological negatives and discomforts the disease carries with it, varying from host to host and again with diet.

Preventing any fecal-borne disease requires educated hygienic habits/culture and effective fecal treatment systems. This is particularly important with A. lumbricoides because its eggs are one of the most difficult pathogens to kill (second only to prions), and the eggs commonly survive 1–3 years. A. lumbricoides lives in the intestine where it lays eggs. Infection occurs when the eggs, too small to be seen by the unaided eye, are eaten. The eggs may get onto vegetables when improperly processed human feces of infected people are used as fertilizer for food crops. Infection may occur when food is handled without removing or killing the eggs on the hands, clothes, hair, raw vegetables/fruit, or cooked food that is (re)infected by handlers, containers, etc. Bleach does not readily kill A. lumbricoides eggs, but it will remove their sticky film, to allow the eggs to be rinsed away. A. lumbricoides eggs can be reduced by hot composting methods, but to completely kill them may require rubbing alcohol, iodine, specialized chemicals, cooking heat, or "unusually" hot composting (for example, over 50 °C (122 °F) for 24 hours).

Infections happen when a human swallows water or food contaminated with unhatched eggs, which hatch into juveniles in the duodenum. Then they penetrate the mucosa and submucosa and enter venules or lymphatics. Next, they pass through the right heart and into pulmonary circulation. They then break out of the capillaries and enter the air spaces. Acute tissue reaction occurs when several worms get lost during this migration and accumulate in other organs of the body. The juveniles migrate from the lung up the respiratory tract to the pharynx where they are swallowed. They begin producing eggs within 60–65 days of being swallowed. These are produced within the small intestine, where the juveniles mature. It might seem odd that the worms end up in the same place where they began. One hypothesis to account for this behavior is that the migration mimics an intermediate host, which would be required for juveniles of an ancestral form to develop to the third stage. Another possibility is that tissue migration enables faster growth and larger size, which increases reproductive capacity.

Giant intestinal roundworms have been known since antiquity. In 1758 Linnaeus named them Ascaris lumbricoides. For many centuries, they were thought to arise by spontaneous generation. In 1855, Ascaris eggs were found in human faeces by Henry Ransom in England then this was described in the literature two years later by Casimir-Joseph Davaine in France. Attempts to infect animals by feeding them eggs were unsuccessful. In 1886, Salvatore Calandruccio in Italy successfully infected a boy to whom he had given 150 eggs. Battista Grassi published this information without giving any acknowledgement to Calandruccio. Development was thought to occur directly within the bowel lumen but in Francis Stewart in Hong Kong in 1916 fed eggs to rats, then later mice, and found infective larvae in the faeces and in the lungs but no mature worms. In 1918, Sadao Yoshida ingested larvae recovered from the trachea of a guinea pig, then found eggs in his own stools 76 days later. In 1922, Shimesu Koino ingested 2,000 Ascaris lumbricoides eggs, found larvae in his sputum a few days later, then after 50 days took an anthelmintic and recovered 667 immature Ascaris lumbricoides, thus confirming the life cycle.

All content from Kiddle encyclopedia articles (including the article images and facts) can be freely used under Attribution-ShareAlike license, unless stated otherwise. Cite this article:
Ascaris lumbricoides Facts for Kids. Kiddle Encyclopedia.