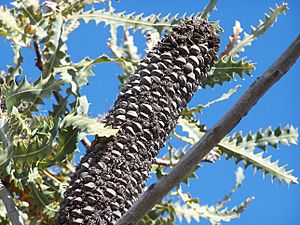 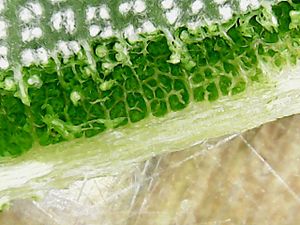 Banksia ashbyi, commonly known as Ashby's banksia, is a species of shrub or small tree that is endemic to Western Australia. It has smooth, grey bark, deeply serrated, hairy leaves and spikes of bright orange flowers.

Banksia ashbyi was first formally described in 1934 by Edmund Gilbert Baker in the Journal of Botany, British and Foreign. The specific epithet honours Edwin Ashby, one of the collectors of the type specimens.

In 2008, Alex George described two subspecies in the journal Nuytsia and the names have been accepted by the Australian Plant Census:

Ashby's banksia grows in heath and spinifex country along the coast of Western Australia between Geraldton and Exmouth. Subspecies ashbyi occurs between Shark Bay and Coorow as well as in the Kennedy Range. Subspecies boreoscaia is found further north, between North West Cape and Quobba.

Seeds do not require any treatment, and take 16 to 61 days to germinate.

All content from Kiddle encyclopedia articles (including the article images and facts) can be freely used under Attribution-ShareAlike license, unless stated otherwise. Cite this article:
Ashby's banksia Facts for Kids. Kiddle Encyclopedia.