Ashelford Hall is a building, erected in 1925, in the tiny community of Esmond which lies in western DeKalb County, Illinois, United States. The structure has been listed on the National Register of Historic Places since 1995. Today, it is under private ownership and largely used for storage. In recent years it had served as an antiques store.

The stone block triangular building, near railroad tracks crossing through Esmond, was constructed in 1925. For the first several years of its history it served as a meeting place for the DeKalb County chapter of the South Grove Grange. The grange met there for a few years until they moved their meeting to the Creston town hall in Ogle County in 1933.

More recently the building served as an antique store ran by Pam Cunningham. The store closed when Pam Cunningham past away, she lived in Fairdale, Illinois. She died in April 2005.

When the building was erected, in 1925, it served as the center of the Esmond social scene. It was multi-functional, serving entertainment, recreation and meeting place purposes. On February 17, 1928, the Esmond Men's Community Club was organized in a meeting at Ashelford Hall. The club was organized to facilitate other community organizations and promote fellowship among the men of Esmond. The men's club met at Ashelford Hall every third Friday of the month for 24 years, until a new school building was constructed in Esmond in 1951 and the club moved to facilities there.

The club itself was organized primarily by three influential Esmond businessmen. William Greenwood, a cashier at the Esmond State Bank, N.T. Gottschall, the pastor at Esmond Methodist Church and Raymond Duell, the station agent at the Esmond Chicago Great Western depot were the three men most responsible for th organization of the club. The club's first meeting attracted a crowd and 52 people joined as charter members. Emmett Rand was elected club president with Greenwood becoming vice president, Duell was elected secretary-treasurer and served in that post until 1967. 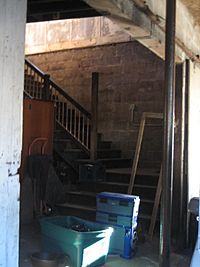 Eventually the club came to sponsor a popular Fourth of July celebration and picnic and served the community in other important ways. In the years since 1925 the generator at Ashelford Hall had come to supply power to the key structures in Esmond. The men's club undertook an effort in 1930s which succeeded in bringing electricity to Esmond, thus eliminating the need for the Ashelford Hall generator. The Esmond Men's Community Club disbanded on December 11, 1974, with four charter members still active in the club.

From the beginning Ashelford Hall served as a community center and entertainment venue. During the 1920s a community orchestra performed at the building for various community and Grange events. The orchestra broke apart in the 1930s but the hall still hosted entertainment events. Vaudeville shows, medicine shows, parties, showers, wedding receptions, all of these were among the events held at Ashelford Hall in its first two decades. The second story become known throughout the community as dance hall. Weekends would feature local bands and orchestras performing while citizens of Esmond and surrounding villages gathered at the hall.

South Grove Grange No. 1838 was organized in 1925 by several members of the Willowdale Grange in DeKalb County and F.A. Jones of Peoria, Illinois. The Grange meetings were held at Ashelford Hall. There the farmers who were members of the Grange would meet to discuss new farming techniques and the farming market as well as see new product demonstrations. In 1929 a juvenile Grange was organized. By the early 1930s the adult Grange had 72 members, DeKalb County's largest such group.

All content from Kiddle encyclopedia articles (including the article images and facts) can be freely used under Attribution-ShareAlike license, unless stated otherwise. Cite this article:
Ashelford Hall Facts for Kids. Kiddle Encyclopedia.