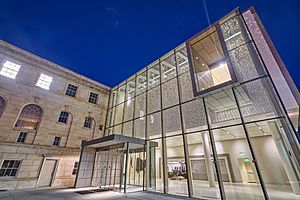 The Asheville Art Museum is a community-based nonprofit visual art organization in Western North Carolina (WNC) and is accredited by the American Alliance of Museums. The Museum is located on the center square of downtown Asheville, 2 South Pack Square at Pack Place.

The Asheville Art Museum presents exhibitions and public programs based on its permanent collection of 20th and 21st century American art. The Museum features regional and national artists through special exhibitions, and showcases works of significance to Western North Carolina’s cultural heritage including Studio Craft, Black Mountain College and Cherokee artists. Educational programs for children and adults are also offered.

Incorporated in 1948, the original home was a three-room building on Charlotte Street, once the land sales office of E.W. Grove, developer of the Grove Park Inn. By 1950, the Museum began acquiring a permanent collection. Quickly, the collection outgrew its home, and the Museum moved to donated space on the 15th floor of the Northwest Bank, now the BB&T building. Forced to move in 1970, the Museum purchased property in the Montford Area Historic District of Asheville. A first full-time Director was hired, and exhibitions became more regional in scope. Programming and attendance expanded, but the aging 40-year-old building presented problems. When plans for the Asheville Civic Center were announced in 1972, the Museum Board accepted an invitation to be one of the three cultural agencies in the center. In 1976, the Museum opened a 9,000-square-foot (840 m2) facility in the Civic Center. In 1984, the Asheville Art Museum became one of few of its size to be accredited by the American Alliance of Museums. 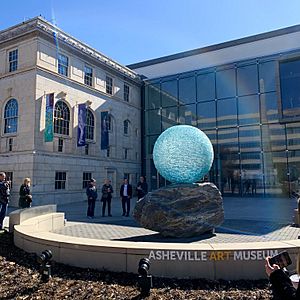 In 1992, the Museum opened in a 1925 Italian Renaissance style building with contemporary additions that was once a library. That facility includes 12,000 square feet (1,100 m2) of space at Pack Place in downtown Asheville. A modest capital expansion, completed in 1999, added space from Pack Place and the adjacent Legal Building, creating new classroom and studio facilities, an art library, a teacher resource center, a community gallery and a new entrance. Following this expansion, the museum occupied 24,400 square feet (2,270 m2) of space.

Between September 2016 and November 2019, the museum had another major expansion project, increasing its size to 54,000 square feet. During this expansion, the permanent collection grew to comprise 8,000+ works (a 31.5% increase since 2017).

The Museum reopened on November 14, 2019. The first public art installation in the plaza is the six-foot diameter chiseled glass orb entitled "Reflections on Unity" by the artist Henry Richardson.

All content from Kiddle encyclopedia articles (including the article images and facts) can be freely used under Attribution-ShareAlike license, unless stated otherwise. Cite this article:
Asheville Art Museum Facts for Kids. Kiddle Encyclopedia.