The Omni Grove Park Inn is a historic resort hotel on the western-facing slope of Sunset Mountain within the Blue Ridge Mountains, in Asheville, North Carolina. It is a AAA Four-Diamond Hotel and has been since 2001. It has been visited by many Presidents of the United States and many other notable personages. Listed on the National Register of Historic Places, the hotel is an example of the Arts and Crafts style. It also features a $44 million, 40,000-square-foot (3,700 m2), modern subterranean spa, which placed number 13 worldwide in Travel + Leisure's World's Best Hotel Spas in 2008. The Grove Park Inn is a member of the Historic Hotel of America, the official program of the National Trust for Historic Preservation. The Grove Park Inn also provides guests with an 18-hole golf course routed on the hill below the hotel. Donald Ross (who designed Pinehurst Resort) designed the original course.

The Grove Park Inn was conceptualized by Edwin Wiley Grove (1850–1927) with the help of his son-in-law Fred Loring Seely (1871–1942). Edwin Wiley Grove, known as the "Father of Modern Asheville", was born in 1850 on a small farm in Tennessee. After serving in the Civil War, he had a very definite plan for his life and career – the pharmaceutical business and the determination to rise from his early poverty to great wealth and success. While in his mid-20s, Grove purchased Paris Medicine Company. Originally based in Paris, Tennessee, the firm was moved to St. Louis. Its primary money-making product was Grove's Chill Tonic, which was a syrup elixir containing quinine. This formula helped tame the raging chills brought on by malaria. While still pursuing new pharmaceutical inventions, Grove met Fred Seely in Detroit, who was making a name for himself in the pharmaceutical business. While working together in Detroit, the two sparked a friendship and mutual admiration. Grove invited Seely to his summer home in Asheville. One week later, he left his position in Detroit to work for Grove and his Paris Medicine Company, but business was not the only thing that interested Seely. When Grove introduced his daughter, Evelyn, to the bachelor, within 24 hours, Grove had given Seely permission to wed her. Seely was married to Evelyn Grove (1877-1953), Edwin's daughter with his first wife Mary Louisa (Lou) Moore Grove. Lou died in 1878 when her daughter, Evelyn, was only one year old. Grove's second wife, Gertrude, was to bear Mr. Grove a son, known as Eddie. After Grove died on January 27, 1927, his second wife and Eddie and Evelyn inherited the income from a trust Mr. Grove had set up. Gertrude sued for widow's rights and busted the trust, but then died in 1928, which allowed Eddie to inherit his mother's share of the Grove fortune. Eddie died six years later in 1934. Most of the fortune was exhausted according to historian Bruce Johnson. In the late 1890s, Grove's Tasteless Chill Tonic, which had become a household staple, sold more bottles than Coca-Cola. After 20 years on the market, Grove has sold over 1.5 million bottles of his tonic and surpassed his dreams by making millions of dollars.

Edwin believed the Asheville, North Carolina climate would have health benefits and be the ideal location for a resort. His doctors sent him there to determine if the climate would help reduce or cure his bouts with extreme hiccups, which would last several weeks at a time.

E. W. Grove began to accumulate the land for the inn and his Grove Park-Kimberly Avenue developments in 1910. He bought several farms and sloped areas all the way to the top of Sunset Mountain. Grove bought and demolished several TB sanitariums in his zeal to change the face of Asheville. Construction began in 1912 and was completed in 11 months and 27 days. This was accomplished by paying high wages to the dedicated workers. Circus tents were erected on the job site to house the workers. Just three days shy of one year, the Grove Park Inn opened on July 12, 1913. Secretary of State William Jennings Bryan delivered the keynote address to 400 of the most distinguished men of the South, gathered for the opening banquet. He had no idea of how true his words would become when he proclaimed that the Grove Park Inn "was built for the ages." The hotel was outfitted with furnishings from the Roycrofters of East Aurora, New York, one of the most important designers and manufacturers of Arts and Crafts furniture, metal work, and other accessories. The hotel was built of rough granite stones and the expansive lobby is noted for its enormous granite fireplaces and expansive porch with its scenic overlook. It was advertised as having "walls five feet thick of granite boulders". Four hundred men worked 10-hour shifts six days a week. With the work of mules, wagons, and ropes, and a lone steam shovel, granite boulders, some weighing as much as 10,000 pounds, were hauled from Sunset Mountain to build the hotel. Seely kept his promise to be open for business in less than one year from the ground breaking.

Sketch of the exterior of the Grove Park Inn by Fred Seely, 1912

During World War II, the Inn was used first as an internment center for Axis diplomats. The diplomats and their staff were allowed guarded trips to town, where they would purchase goods from the local merchants. This was a boon to the strapped local economy. The inn was then used by the Navy as a rest and rehabilitation center for returning sailors. In 1944–45, the hotel was an Army Redistribution Station where soldiers rested and relaxed before being assigned to other duties. The Philippine government functioned in exile from the Presidential Cottage on the grounds during the war.

The Grove Park Inn became part of Sammons Enterprises in 1955. The resort has been expanded over the years under the direction of the owners Mr. and Mrs. Sammons and continues to be a popular tourist attraction. Mrs. Sammons would bring her dog in under cover in a baby carriage. Mrs. Sammons died in 2008. KSL Resorts acquired the Grove Park Inn in 2012 for $120 million. They sold it to Omni Hotels in 2013, and it was renamed the Omni Grove Park Inn.

In 1917, just four years after the completion of the construction of the Grove Park Inn, Fred Seely purchased Biltmore Estate Industries from Edith Vanderbilt, wife of George Washington Vanderbilt II, the owner of the Biltmore Estate in Asheville, North Carolina. This new venture came in addition to his responsibilities as the manager of the Grove Park Inn. E.W. Grove, his father-in-law and owner of the Grove Park Inn, had refused to sell the hotel to Seely, though he had eagerly allowed him to construct the building. He instead leased the hotel to Seely to manage and Seely managed the hotel until 1927, the year of Grove's death and the year Seely lost his legal bid to own the hotel. Grove left his hotel to his wife and son and daughter. Though Seely was married to his daughter, Grove made no concessions to Seely and the inn passed into the hands of what one advertisement described as "more liberal management." An interesting annotation by Seely scribbled next to the advertisement found in his files takes issue with that characterization.

Ten (future) Presidents have stayed at the hotel:

According to a 2013 article in the Wall Street Journal, the U.S. Supreme Court planned to relocate to the Grove Park Inn in the event of a nuclear attack. 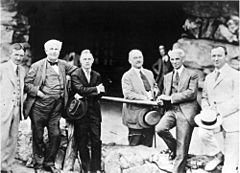 Harvey Firestone, Thomas A. Edison (there's a restaurant named after him there), Henry Ford, and Fred Seely at Grove Park Inn, 1918

F. Scott Fitzgerald stayed at the hotel for two years (1935 and '36) to write while his wife Zelda was in an insane asylum in Asheville, which she later died in. F. Scott died in 1940. The rooms in which he stayed, 441 and 443, are available for guests. One is furnished exactly as it was during his stay in the 1930s. His typewriter is on display in the Vanderbilt wing. Rooms in which famous people stayed are marked by plaques on the door saying who stayed there and when.

On February 3, 1930, William Howard Taft resigned from the U.S. Supreme Court in the Great Hall lobby. He died a month later.

In 1920, a guest dubbed The Pink Lady died in a fall to the Palm Court from the balcony in the old middle part of the Inn (the floors above the main lobby). Her room number was 545.

All content from Kiddle encyclopedia articles (including the article images and facts) can be freely used under Attribution-ShareAlike license, unless stated otherwise. Cite this article:
The Omni Grove Park Inn Facts for Kids. Kiddle Encyclopedia.