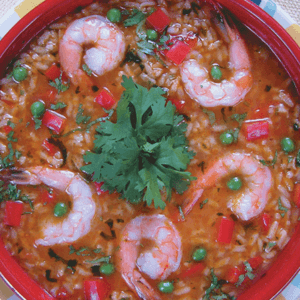 Asopao is a family of stews that can be made with chicken, pork, beef, shrimp seafood, vegetables, or any combination of the above. Asopao is Puerto Rico's national soup and one of the most important gastronomic recipes in Puerto Rico.

Versions of asopao are found in many Caribbean locales, including the Dominican Republic, where the addition of chicharrones de pollo (small bits of fried chicken or chicken skin) is characteristic or coconut milk and shrimp.

A version said to be based on the Spanish rice dish paella includes chorizo, chicken or rabbit and a variety of seafood cooked in sherry wine.

Asopao de gandules replaces rice with pigeon peas. Meat (usually roasted pork, beef or oxtail) and dumplings made from green banana, plantains, root vegetables, squash, annatto, milk, eggs and flour. The dumplings are made into golf size balls and often seasoned with herbs. They are fried before dropped into the soup.

Asopao is typically flavored with wine, stock, bay leaf and oregano, along with sofrito, olives, capers, and rice being the most important part. Garnish with sweet peas and severed with mojito isleño, bread, tostones and avocado.

Asopao is mentioned in "Caribbean Conspiracy" by Brenda Conrad, about a story that takes place in Puerto Rico which was published in 1942 and printed as a weekly series in dozens of U.S. newspapers in 1943.

Asopao is mentioned in passing in the seventh episode of the third season of Netflix’s series Daredevil, titled “Aftermath.”

All content from Kiddle encyclopedia articles (including the article images and facts) can be freely used under Attribution-ShareAlike license, unless stated otherwise. Cite this article:
Asopao Facts for Kids. Kiddle Encyclopedia.