A. densa grows in rocky areas; in California it is often a member of the serpentine soils flora on rocky mountain slopes, well-drained but seasonally moist.

This fern has leaves on long petioles, with the blade occupying less than half of the total length of the leaf when including the petiole. The fertile and sterile leaves may look alike or slightly different. The leaf blade is triangular and composed of many leaflets which are subdivided into untoothed segments. The segments are lined with sori over which the edges of the leaf are folded to form a false indusium.

Aspidotis densa develops on crevices and exposed rocky outcrops in mossy cracks, and over time creeps to fill in every fissure, creating well-established colonies in the outcrop. They may exhibit frond dimorphism, that is, the sterile fronds are shorter and pinnae broader than the fertile, which rise above on long, wiry petioles. The pinnae of the fertile fronds are very narrow and lace-like [4].

Aspidotis densa is a regional ecologic indicator on areas where ultramafic rocks are patchy, such as the Klamath Mountains of northern California and southwest Oregon, the areas of serpentine soil can be clearly seen as sparsely covered areas or open forest bounded by closed forest on the non-ultramafic soils [1]. 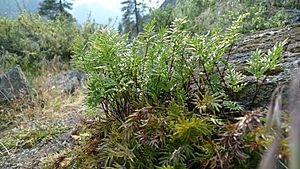 Relationships between vascular plants with an emphasis on the ferns as summarized from morphological and molecular phylogenetic analyses. Kenrick and Crane (1997) summarizes the results of previously published studies[2].

All content from Kiddle encyclopedia articles (including the article images and facts) can be freely used under Attribution-ShareAlike license, unless stated otherwise. Cite this article:
Aspidotis densa Facts for Kids. Kiddle Encyclopedia.