Asplenium pinnatifidum, commonly known as the lobed spleenwort or pinnatifid spleenwort, is a small fern found principally in the Appalachian Mountains and the Shawnee Hills, growing in rock crevices in moderately acid to subacid strata. Originally identified as a variety of walking fern (Asplenium rhizophyllum), it was classified as a separate species by Thomas Nuttall in 1818. It is believed to have originated by chromosome doubling in a hybrid between walking fern and mountain spleenwort (Asplenium montanum), producing a fertile tetraploid, a phenomenon known as alloploidy; however, the hypothesized parental hybrid has never been located. It is intermediate in morphology between the parent species: while its leaf blades are long and tapering like that of walking fern, the influence of mountain spleenwort means that the blades are lobed, rather than whole. A. pinnatifidum can itself form sterile hybrids with several other spleenworts.

Asplenium pinnatifidum is a small fern with bright green, wrinkled, pinnatifid (lobed) fronds. These form evergreen, perennial tufts. Notable characteristics are the shiny stem, dark only at the base, and the long-tapering, variably lobed leaf blades. The fronds are monomorphic, the sterile and fertile fronds appearing the same size and shape.

The roots of A. pinnatifidum are not proliferous, so it appears as clusters of leaves springing from a single rhizome. The leaves are closely spaced on the rhizome, which is frequently branched. The rhizome is about 1 millimeter (0.04 in) in diameter, covered with narrowly triangular scales which are dark reddish-brown or blackish in color, and strongly clathrate (bearing a lattice-like pattern). The scales are 3 to 5 millimeters (0.1 to 0.2 in) long and 0.3 to 0.5 millimeters wide, with untoothed edges. The stipe (the stalk of the leaf, below the blade) is shiny and dark reddish brown at the base. The color fades to green in the upper one-third to one-half of the stipe. It is covered in narrowly triangular, dark reddish-brown scales at the base, which diminish into hairs in the upper part of the stipe. It may show narrow wings from the base of the leaf to near the base of the stipe. The stipe is 1 to 10 centimeters (0.4 to 4 in) long, and may be from one-tenth to one and one-half times the length of the blade.

The overall shape of the blade is narrowly triangular or lance-shaped, sometimes with an irregular outline. The blade tapers to a long point, the length of the taper being variable among specimens. The blades are generally curled with downward-pointing tips. The tip of the blade sometimes develops a swelling which may differentiate into a proliferous bud and, very rarely, into a plantlet, as in walking ferns. Adventitious sporangia may appear around the buds when they form, even, unusually, on the upper surface of the leaf. The base of the blade may be squared off or notched to a varying extent along the rachis (central axis of the leaf). The blade ranges from 2 to 17 centimeters (0.8 to 7 in) long, rarely to 20 centimeters (7.9 in), and 1 to 4 centimeters (0.4 to 2 in) in width, rarely to 13 centimeters (5.1 in), and is thick and somewhat leathery. Blades are either entirely pinnatifid (lobed but not completely cut), or cut to form a single pair of pinnae at the base. When they exist, the pinnae are roughly oval or triangle-shaped, sometimes narrow, and are from 5 to 20 millimeters (0.2 to 0.8 in) long, rarely to 90 millimeters (3.5 in), and 0.4 to 1 millimeters in width (rarely to 1.2 millimeters). The base of the pinnae may be squared off or taper to a point, while the edges are wrinkled to toothed. The tip can vary from rounded to pointed. The lobes of the blade gradually diminish towards the tip, sometimes becoming simply wavy. The rachis is green, sometimes turning tan when dry. The underside of the rachis and blade have a few scattered, small hairs. Overall, the blades are quite morphologically variable; in younger blades, the edges may be not at all lobed or may be wavy. The veins are free and forking, only rarely anastomosing (rejoining one another to form nets). 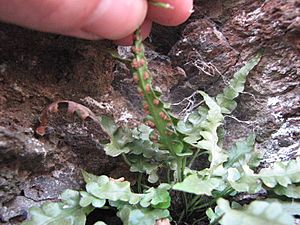 Each segment (pinna or lobe) of a fertile frond has one to six sori, sometimes more than forty in extreme cases. The sori usually fuse with one another as they age. These are 1 to 2 millimeters (0.04 to 0.08 in) long They are covered with thin, whitish indusia with untoothed edges, which are persistent. Each sporangium holds 64 spores. The species has a chromosome number of 144 in the sporophyte, indicating an allotetraploid origin.

While no named varieties or forms of A. pinnatifidum have been described, an unusual population was described from Giant City State Park in southern Illinois in 1956. In it, the leaf blade was highly reduced, barely exceeding the rachis, except for a series of stubby projections under which the sori were borne. Individual plants have also been known on occasion to develop forked leaves, which appears to be a developmental accident rather than a stable genetically-controlled trait.

A. pinnatifidum is somewhat similar to its parent species A. rhizophyllum. In comparison, however, A. pinnatifidum is distinctly lobed when mature, tends to have longer stipes in proportion to its leaf size, and has a more upright habit. It might be confused with Countess Dalhousie's spleenwort (A. dalhousiae), of Asia and the American Southeast, but the latter has short, dull stipes with larger, toothed scales. A. pinnatifidum closely resembles the hybrid Scott's spleenwort (A. × ebenoides) (including the fertile Tutwiler's spleenwort, A. tutwilerae), but those species have a wholly dark stipe, with the dark color extending into the rachis, and longer lobes on the blade.

Among the hybrid species of which it is a parent, A. pinnatifidum is most similar to Graves' spleenwort (A. × gravesii), a hybrid with Bradley's spleenwort (A. bradleyi), and to a lesser extent, to Trudell's spleenwort (A. × trudellii) and Kentucky spleenwort (A. × kentuckiense). In A. × gravesii, the dark color of the stipe extends to the base of the leaf blade, the blades often have more than one pair of pinnae, and their edges are shallowly wrinkled or toothed. In addition, the basal pinnae, which may themselves be pinnatifid, lack a stalk, the leaf blade is pointed at the tip but not drawn out at length, and there are generally fewer fronds. Its sori are dark brown, rather than cinnamon brown. A. trudellii is fully pinnate in the lower half of the blade, and its pinnae are toothed. A. × kentuckiense is also fully pinnate towards the base of the blade, with four to six pairs of pinnae, and the brown color of its stipe extends up into the basal part of the rachis.

Lobed spleenwort was first recognized by Henry Muhlenberg in 1813, who considered it a variety of Asplenium rhizophyllum, although he did not provide a description distinguishing the variety. In 1818, Thomas Nuttall observed that it was always distinguishable from A. rhizophyllum, and described it as a species under the name of Asplenium pinnatifidum. Alphonso Wood used the name Camptosorus pinnatifidus for the species in 1870, but this was not widely accepted.

In 1953, he made chromosome counts of A. × trudellii, which had been classified by some simply as a variety of A. pinnatifidum. As A. pinnatifidum proved to be a tetraploid while A. montanum was a diploid, a hybrid between them would be a triploid, and Wagner showed that this was in fact the case for A. × trudellii. His further experiments, published the following year, strongly suggested that A. pinnatifidum is an allotetraploid, the product of hybridization between A. montanum and A. rhizophyllum to form a sterile diploid, followed by chromosome doubling that restored fertility. However, the hypothesized sterile diploid has never been found. Partial pairing of homologous chromosomes in A. × gravesii and A. × trudellii confirmed A. montanum parentage for A. pinnatifidum, while an artificial hybrid between A. pinnatifidum and Tutwiler's spleenwort (A. tutwilerae) helped confirm their shared A. rhizophyllum parentage.

In 1956, C. V. Morton pointed out that, as A. pinnatifidum had been shown to arise from hybridization between walking fern and mountain spleenwort, it would constitute an intergeneric hybrid if walking fern was placed in the genus Camptosorus (as Camptosorus rhizophyllus). The hybrid genus ×Asplenosorus had been published, but Morton noted that it lacked a Latin diagnosis and was therefore invalid under the International Code of Botanical Nomenclature; he preferred to continue recognizing Asplenium pinnatifidum in Asplenium. The ICBN's rules were relaxed in 1972, and in 1974, John Mickel published Asplenosorus pinnatifidus as a new combination for the species to allow the continued recognition of Camptosorus. Since then, phylogenetic studies have shown that Camptosorus nests within Asplenium, and current treatments do not recognize it as a separate genus.

In addition to A. × gravesii, A. × trudellii, and A. × kentuckiense, A. pinnatifidum is known to be the parent of several other hybrid species. A sterile triploid hybrid, formed by the crossing of A. pinnatifidum with a diploid cytotype of maidenhair spleenwort (A. trichomanes ssp. trichomanes) was discovered in 1969 and named A. × herb-wagneri in 1977. Finally, several unnamed hybrids have been grown in culture. The hybrid between A. pinnatifidum and A. tutwilerae showed a "nondescript" morphology intermediate between the two parents, with slightly narrower lobes and more dimorphic fronds than A. pinnatifidum, overall resembling A. × kentuckiense but with more regular lobes. Another, between A. pinnatifidum and the tetraploid American hart's-tongue fern (A. scolopendrium var. americanum) yielded peculiar specimens with a long blade, similar in texture and doubled indusia to the hart's-tongue fern, but lengthened and tapering to a point, and not lobed except for two surprisingly large auricles at the base.

Native to eastern North America, A. pinnatifidum occurs in the middle and southern Appalachian Mountains, from Pennsylvania and New Jersey southwest to Alabama and the northeastern corner of Mississippi. It is also found in the Shawnee Hills and to some extent in the Ozarks, with outlying occurrences in southeastern Oklahoma and in Iowa County, Wisconsin. Early reports from New England proved to be variants of Scott's spleenwort, Asplenium × ebenoides. 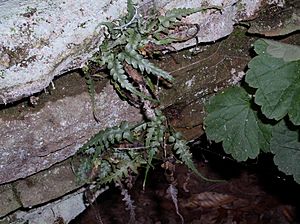 Clump of A. pinnatifidum in its typical cliff crevice habitat.

The species is considered apparently secure globally (G4), but is endangered in many parts of its range. NatureServe considers it to be critically imperiled (S1) in Illinois, Maryland, Mississippi, New Jersey, Oklahoma, South Carolina, and Wisconsin, imperiled (S2) in North Carolina, and vulnerable (S3) in Arkansas, Georgia, Pennsylvania, and Virginia. It is threatened by changes in land use, habitat fragmentation, and certain forest management practices.

A. pinnatifidum can be cultivated in rock gardens and terraria. It prefers medium light and will grow on a moist soil or potting mixture. Some authorities recommend adding sandstone chips to the soil.

All content from Kiddle encyclopedia articles (including the article images and facts) can be freely used under Attribution-ShareAlike license, unless stated otherwise. Cite this article:
Asplenium pinnatifidum Facts for Kids. Kiddle Encyclopedia.