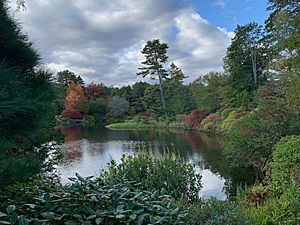 An October 2019 view across Asticou Pond from Peabody Drive

The Asticou Azalea Garden in Northeast Harbor, Maine, United States, is a popular visitor attraction. It was created by lifelong resident of the village, Charles Kenneth Savage, in 1956. Savage also created Reef Point Estate in nearby Bar Harbor. It was from Reef Point that several specimens, with the financial assistance of John D. Rockefeller, Jr., were moved, including the weeping hemlock, just north of the main bridge.

Located at the intersection of Route 198 and Route 3 (Peabody Drive), the 2.3 acre garden and its pond are open to the public during daylight hours from May 1 to October 31. It features a selection of rhododendrons and azaleas, including the Rhododendron canadense, Maine's native azalea. Styled after a Japanese stroll garden, the fine-gravel paths are raked regularly in a manner that suggests flowing water. There is also a sand garden, where this effect is repeated but with the addition of stones, which are meant to represent islands.

Savage was also the owner of the Asticou Inn, which is located on the opposite side of Peabody Drive. Group photographs for weddings at the inn are often taken in the Garden.

All content from Kiddle encyclopedia articles (including the article images and facts) can be freely used under Attribution-ShareAlike license, unless stated otherwise. Cite this article:
Asticou Azalea Garden Facts for Kids. Kiddle Encyclopedia.