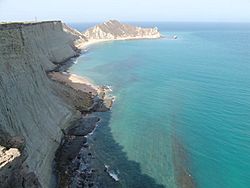 Astola Island, also known as Jezira Haft Talar (Urdu: جزیرہ ہفت تلار) or 'Island of the Seven Hills', is an uninhabited island in the Arabian Sea. It is part of Pakistan, about 25 km south of Pakistan's nearest coastline and 39 km southeast of the fishing port of Pasni. Astola is Pakistan's largest offshore island and the only major island in the northern Arabian Sea. It is about 6.7 km2 (0 sq mi) large. Administratively, the island is part of the Pasni subdistrict of Gwadar District in Balochistan province.

All content from Kiddle encyclopedia articles (including the article images and facts) can be freely used under Attribution-ShareAlike license, unless stated otherwise. Cite this article:
Astola Island Facts for Kids. Kiddle Encyclopedia.