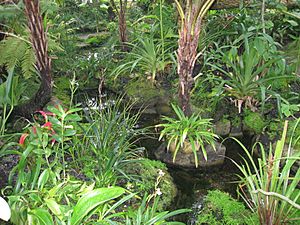 The Atlanta Botanical Garden is a 30 acres (12 ha) botanical garden located adjacent to Piedmont Park in Midtown Atlanta, Georgia, United States. Incorporated in 1976, the garden's mission is to "develop and maintain plant collections for the purposes of display, education, conservation, research and enjoyment." 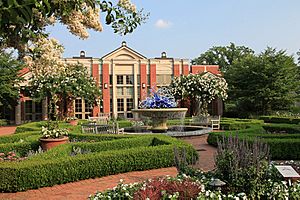 Following a petition by citizens of Atlanta in the year 1973, the garden was incorporated in 1976, as the private, 501(c)(3) non-profit corporation Atlanta Botanical Garden Inc.. The garden incorporated the pre-existing Dr. A. Leslie Stephens Memorial Bonsai Garden, now known as the Japanese Garden. Within a year Bill Warner, previously employed at Holden Arboretum, was assigned office as the first executive director. He was soon followed by Ann L. Crammond in 1979. The following year marked a turning point in the history of the garden as a 50-year lease was negotiated with the city, securing the site of the Garden for years to come.

A number of promotional activities started taking place, including social events, major art exhibitions and the annual Garden of Eden Ball. The Atlanta Botanical Garden welcomed its 50,000th visitor within a mere three years after the lease was arranged - this was even before any permanent structures had been erected. In 1985, the Atlanta Botanical Garden built its first permanent structure, the Gardenhouse. Expansions following this were The Children's Garden (1999), the Fuqua Conservatory in 1989, and the Fuqua Orchid Center which was added in 2002.

In the winter the Garden has a holiday light show. "Garden Lights, Holiday Nights" began in 2011 featuring displays created with more than 1 million lights, most of them LED. The following year, the show grew to more than 1.5 million lights and attracted more than 160,000 visitors.</https://www.tripadvisor.com/Guide-g60898-k2457-Atlanta_Georgia.html>

Chihuly in the Garden Exhibition

In 2004, the Atlanta Botanical Garden hosted an exhibition of glass art by Dale Chihuly titled "Chihuly in the Garden". The exhibit ran through the end of October and was extended until December 31, 2004. During the eight-month run, an estimated 425,000 attendees visited the exhibit. The peak per-day rates of 7,500 were double the previous single-day attendance record at the Garden. Chihuly in the Garden returned to the Atlanta location on April 30, 2016 with 19 new installations. 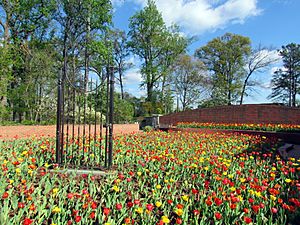 The Green Expansion Plan was a large-scale expansion project that was completed in the spring of 2010 that doubled the size of the Garden while modernizing them at the same time. The expansion plan encompassed the construction of a number of new facilities, the most noticeable of which are the new visitor center and 600-foot-long (180 m) canopy walk.

The plan was built around five key areas of human and environmental health: sustainable site development, water savings, energy efficiency, materials selection and indoor environmental quality. By employing an array of energy-saving strategies with environmental sustainability considered throughout the project and recycling any trees removed as a result of construction, considerable efforts were made to make this expansion eco-friendly. A 100,000-gallon cistern was installed underground in December 2007 to aid in water conservation; the cistern fills with only an inch and a quarter of rain and waters about 40% of the new gardens.

One striking feature of the new visitor center is the innovative green roof, with plants covering nearly 50% of the roof area. It provides natural cooling, sound insulation and additional garden area for visitors, and even a new wildlife habitat. The visitor center leads visitors to the canopy walk.

The garden's old parking lot is now a beautiful Edible Garden featuring an outdoor kitchen; this new garden reconnects people with food and healthful eating. And the final aspect of the garden expansion plan is the conversion of its old entry drive to a large cascades garden filled with tropical plants and gently flowing waterfalls.

The Atlanta Botanical Garden is home to the Kendeda Canopy Walk, a 600-foot-long (180 m) skywalk that allows the visitors to tour one of the city's last remaining urban forests from around 40 feet in the air through the treetops of the Storza Woods. The skywalk extends from a bluff in the Garden into the branches of oaks, hickories and poplars. The structure also provides an aerial view of the woodland garden below.

The Canopy Walk was built for $55 million and opened in 2010. It was originally set to open in 2009, but during its construction in 2008, the skywalk collapsed, killing one worker and injuring 18 others. Because of the uniqueness of the Canopy Walk, city leaders believe it will become an icon for Atlanta.

The Botanical Garden is composed of a number of smaller themed gardens. Each contains different landscapes to display a variety of plants. Near the entrance are formal gardens, such as the Japanese garden and the rose garden. Two woodland areas, the 5 acres (20,000 m2) Upper Woodland and the 10 acres (40,000 m2) Storza Woods feature large trees and shade-loving flowers and undergrowth. The Children's Garden features whimsical sculptures, fountains, and interpretive exhibits on botany, ecology, and nutrition.

The 16,000 square feet (1,500 m2) Dorothy Chapman Fuqua Conservatory contains indoor exhibits of plants from tropical rainforests and deserts. The rain forest room of the Fuqua Conservatory is also populated by tropical birds, turtles, and several exhibits of poison dart frogs, the last of which is a collaboration in conservation efforts with Zoo Atlanta. Adjoining this building, the Fuqua Orchid Center contains separate rooms simulating the tropics and high elevations in order to house rare orchids from around the world.

The Fuqua Orchid Center is home to the largest collection of species orchids on permanent display in the U.S. and hosts a wintertime display known as Orchid Daze. Its unique Tropical High Elevation House provides the correct habitat for montane orchids and companion plants from around the equator at elevations of 6,000 to 10,000 feet. An Air Washer System, technology adapted from the textile industry, was combined with traditional greenhouse heating and cooling to create this environment and allows rare orchids to thrive. The Tropical Display House is filled with fragrant orchids from around the world.

All content from Kiddle encyclopedia articles (including the article images and facts) can be freely used under Attribution-ShareAlike license, unless stated otherwise. Cite this article:
Atlanta Botanical Garden Facts for Kids. Kiddle Encyclopedia.