Auburn is an antebellum mansion in Duncan Park in Natchez, Mississippi. It was designed and constructed by Levi Weeks in 1812, and was the first building to exhibit Greek Revival order in the town. Its prominent two-story Greek portico served as a model for the subsequent architectural development of local mansions. It was declared a National Historic Landmark in 1974 and a Mississippi Landmark in 1984.

Auburn is a two-story brick building, with a central core and flanking symmetrical wings. A four-column temple front adorns the center of the block, with modified Ionic columns supporting an entablature and fully pedimented gable. The gable has modillioned cornices and an oval window at its center. The main entrance is set in a segmented-arch opening along with flanking sidelight windows and a transom window above. Sheltered by the temple portico is a second floor balcony, which is accessed via a doorway that is only slightly less elaborate than the main entry.

In 1811, Lyman Harding, the first Attorney General of Mississippi, hired Levi Weeks, a young architect, to design and build the mansion. The original building was 60 feet (18 m) by 45 feet (14 m) with a two-story portico supported by four columns and includes an unusual floating spiral staircase between the first and second floors. Levi Weeks designed the house to be, in his words, the "most magnificent building in the state."

After Harding died in 1820, the building was bought by Dr. Stephen Duncan, who expanded the house to include two symmetrical wings, greatly expanding interior space. Duncan later abandoned the building amidst growing secession tensions just before the American Civil War, and the house was placed in the care of his descendants.

The building and 222 acres (90 ha) was sold by the family to the city of Natchez in 1911 and is now a historic house museum in a public park. The grounds were converted by the City of Natchez into Duncan Park. 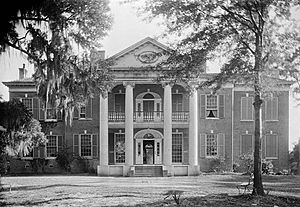 All content from Kiddle encyclopedia articles (including the article images and facts) can be freely used under Attribution-ShareAlike license, unless stated otherwise. Cite this article:
Auburn (Natchez, Mississippi) Facts for Kids. Kiddle Encyclopedia.