Auchencloigh Castle or Auchincloigh Castle (NGR NS 4945 1666 ) is a ruined fortification near the Burnton Burn, lying within the feudal lands of the Craufurd Clan, situated in the Parish of Ochiltree, East Ayrshire, Scotland. 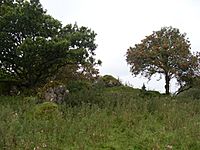 No description or accurate pictorial representation of Auchencloigh castle seems to have survived. The site of the castle is on a mound and in 1978 some of its walls were standing at a height of between 0.6 and 1.6m and several feet in thick in a few places. The walls formed a rectangle and the interior seems to have been subdivided into several small rooms.

Auchencloigh may once have been part of a chain of fortalices forming a defensive line, including Drongan and Martnaham castles.

The ruins of this medieval tower are of whinstone, were lime mortared and lie 100 metres to the east of the Auchencloigh Farm. No dating evidence has been found, however, an early date is suggested by the thickness of the walls. A 15th-century date has been suggested by one author.

Auchincloigh Farm was located nearby with a belt of woodland. The site of the castle is scheduled under the Ancient Monuments and Archaeological Areas Act 1979.

A William Wallace of Auchincloych was a witness to a precept by James Lord Torphicen in favour of John Chalmer of Inchgotrick in 1579.

In 1578 William and James Cuninghame of Polquharne (sic) granted the lands of Burntoun within their lands of Easter Polquharne to John Cuninghame, son of the said James. These lands were contiguous or inclusive of Auchencloigh.

The area around the site of the castle and old farm was the site of a large opencast mine, however it is now restored to agricultural use.

The name derives from the Gaelic achadh meaning field and cloiche meaning stone. The placenames 'Auchencloich' and 'Auchencloy' are found elsewhere in Scotland. A hamlet named Auchencloigh is located in the parish of Sorn. Auchencloigh Lodge is a house located on the entrance drive to the old farm.

There is a clearly defined 17th-century type holloway that follows the Roman road as far as Auchencloigh near to Old Polquhairn, probably the same road shown on Armstrong's map of 1775 running from Bank (present Bankglen on the New Cumnock - Dalmellington road) over to the present Littlemill. It has a heavy cobbled bottom with clay on top.

All content from Kiddle encyclopedia articles (including the article images and facts) can be freely used under Attribution-ShareAlike license, unless stated otherwise. Cite this article:
Auchencloigh Castle Facts for Kids. Kiddle Encyclopedia.