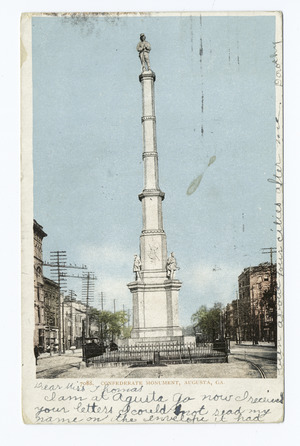 The Augusta Confederate Monument, also known as the Richmond County Confederate Monument, is located in the median of the 700 block of Broad Street in downtown Augusta, Georgia. This Confederate monument soars seventy-six feet into the sky, set on a granite base topped by a shaft of Carrara marble. The monument was commissioned by the Ladies Memorial Association of Augusta as a memorial in 1875. It was designed by the architectural firm of VanGruder and Young of Philadelphia, built by the Markwalter firm of Augusta, carved by Antonio Fontana, and dedicated on October 31, 1878.

Around the base of the monument are the life size statues of four Southern generals in the American Civil War: Thomas R. R. Cobb, Stonewall Jackson, Robert E. Lee, and William H. T. Walker.

Worthy
to have lived and known
our Gratitude:
Worthy
to be hallowed and held
in tender Remembrance:
Worthy
the fadless Fame which
Confederate soldiers won.
who gave themselves in life
and Death for us:
For the Honor of Georgia.
For the Rights of the States.
For the Liberties of the South.
For the Principles of the Union.
as these were handed down to
them by the Fathers of
Our Common Country.

In Memoriam
"No nation rose so white
and fair:
None fell so pure of crime.

Erected
A.D. 1878.
by
the Ladies
Memorial Association
of Augusta.
In honor of the men of
Richmond County.
Who died
in the cause of the
Confederate States.

All content from Kiddle encyclopedia articles (including the article images and facts) can be freely used under Attribution-ShareAlike license, unless stated otherwise. Cite this article:
Augusta Confederate Monument Facts for Kids. Kiddle Encyclopedia.