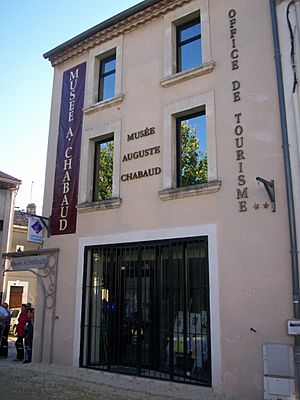 Auguste Chabaud (born 3 October 1882 in Nîmes, Gard, died 23 May 1955 in Graveson, Bouches-du-Rhône) was a French artist and sculptor.

Chabaud was born in Nîmes. He began studying arts in Avignon, aged 14. In 1899, he went to Paris and continued studying arts. In his early phase, his paintings were fauvistic. In 1919, he moved to the village of Graveson and stayed there for the rest of his life. Since 1920, he only used Prussian blue for his paintings. In 1955, he died in Graveson. The Musée Auguste Chabaud was opened in this village in 1992.

All content from Kiddle encyclopedia articles (including the article images and facts) can be freely used under Attribution-ShareAlike license, unless stated otherwise. Cite this article:
Auguste Chabaud Facts for Kids. Kiddle Encyclopedia.