Augustinian Province of England and Scotland facts for kids 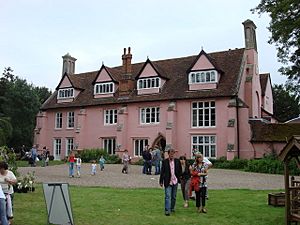 The Order of Saint Augustine is a Roman Catholic religious order. It was created in the 13th century and basd upon the Rule of St. Augustine of Hippo. There are Augustinians in the majority of countries around the world, including Europe, Oceania and the Americas.

The Province of England and Scotland

St John Stone is the patron of the Province of England and Scotland. The Augustinians, known from medieval times in England as the Austin Friars, came to England in 1248, in answer to the invitation of Richard de Clare, Earl of Gloucester and Hertford. Richard gave the friars land on which to establish their first foundation at Clare. The priory at Clare thus became the first Augustinian foundation in the English-speaking world. Other houses were opened in quick succession. In 1253 they settled in London where ‘Austin Friars’ was to become the most important house of the Order in England. The priory at Clare reflected the contemplative nature of the friars. The foundation in London reflected the missionary zeal of the new mendicant order. The next development, the setting up of houses in the university cities of Oxford (1266) and Cambridge (1289), represented the Order’s desire to further the study of theology and to maintain high standards of scholarship. In common with all provinces, the English friaries came under the authority of the Prior General, represented by John of Gubbio. However, by the year 1265 when the first provincial chapter was celebrated at Clare, England had become a separate province with its own prior provincial. In 1300, just over fifty years after they first arrived in Britain, the Austin Friars had twenty-two houses in Britain and a further twenty houses in Ireland. Further expansion in England raised this number to thirty-four before the end of the fourteenth century. At the moment of its greatest expansion in 1350 the province would have numbered more than 700 friars and yet the fifteenth century saw it decline until at the moment of suppression in 1538 there were only 317 members. Among the members of the Province there were noteworthy writers, Osbern Bokenham, poet, John Capgrave, Biblical commentator and historian, Myles Coverdale, translator of the Bible into English, William Flete, spiritual adviser to St Catherine of Siena. In the ranks of the saints, Saint John Stone, martyred under Henry VIII, was named patron of the Province when it was re-established in 1977. With the suppression of the monasteries in England, Augustinian life was marked by silence from the mid-16th century until the mid-19th century.

There were some courageous attempts to restore or to continue Augustinian life by individuals who came from Spain, Rome and Ireland. Eventually, thanks to the missionary zeal and strength of the Irish Province, it was possible to make a new start in the second half of the nineteenth century when St Monica’s, Hoxton Square, the first permanent foundation since the Reformation, was opened in1864, followed by Our Lady of Good Counsel, Hythe (1891) and St Augustine’s, Hammersmith (1903; 1905). The consolidation of these communities continued and was followed by significant expansion in the second half of the century. The Order took on the responsibility of the parish of SS Peter and Paul, Dundee, in 1948. The return to Scotland heralded the renaissance of the Anglo-Scottish province. Further development took place in 1951: a new school, Austin Friars, was established in Carlisle, in the north of England. Austin Friars began as a boarding school for boys (11 yrs – 18yrs), with some day pupils. In the twenty-first century, it is co-educational, educates only day pupils (3yrs –18yrs).

With the desire to establish a school fulfilled, the next step was a truly historic occasion. Clare Priory, the first-ever Augustinian foundation in Britain, was bought back and became the novitiate for the vice-province. History was made when the first chapter of the Order to be held in England since 1532 took place in Clare in 1970.The 1970s saw further, considerable growth, with the establishment of parishes in Woodvale, Southport, and Bishop’s Court Preparatory School nearby, and then St Mary’s, Harborne, Birmingham, together with St Mary’s, Great Yarmouth. With such growth, supported by generous assistance from the mother Province in Ireland and encouraged by several vocations from England and Scotland, the vice-province was granted full Province status in September 1977. Fr Bernard O’Connor became Provincial of the new Anglo-Scottish Province.

As of 2015, there are 5 Augustinian communities around the UK; St. Mary's, Harborne, St. Joseph's, Broomhouse, Edinburgh, Clare Priory in Suffolk (which was the first Augustinian House in the UK), St. Augustine's, Hammersmith and St. Monica's, Hoxton. There are around 35 Augustinian Friars in total serving in the UK.

There is also a community of Augustinian Sisters at the Boarbank Convent in Cumbria.

All content from Kiddle encyclopedia articles (including the article images and facts) can be freely used under Attribution-ShareAlike license, unless stated otherwise. Cite this article:
Augustinian Province of England and Scotland Facts for Kids. Kiddle Encyclopedia.