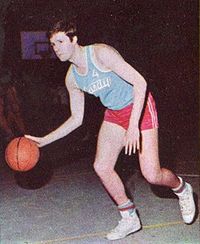 Augusto Giomo (3 February 1940 – 27 January 2016) was an Italian basketball player. He competed at the 1960 and 1964 Summer Olympics. He finished in fourth and fifth place. His younger brother Giorgio played for Italy at the 1972 Summer Olympics. He was born in Treviso.

All content from Kiddle encyclopedia articles (including the article images and facts) can be freely used under Attribution-ShareAlike license, unless stated otherwise. Cite this article:
Augusto Giomo Facts for Kids. Kiddle Encyclopedia.