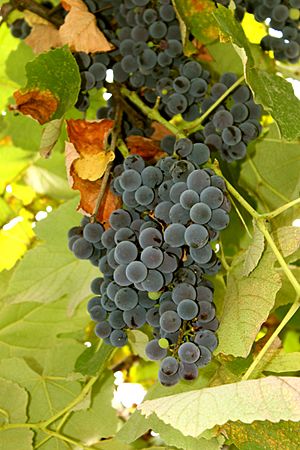 Pinot noir has been widely used throughout Azerbaijan for wine-making

Azerbaijan has a successful wine industry that dates back to the 2nd millennium BC. Azerbaijan's long history of wine-making was rediscovered at archaeological digs of settlements in Kültəpə, Qarabağlar and Galajig. Archaeologists discovered stone fermentation and storage containers that included remnants and grape seeds dating back to the 2nd millennium BC. The Ancient Greeks were well aware of wine production in the area by at least the 7th century BC according to Herodotus. Later Strabo would comment in the 1st century BC about an Azerbaijani wine known as Albania. Arabic historians and geographers described the extensive viticulture around Ganja and Barda that was taking place even after Islamic conquest of the area.

Since the end of the Soviet Union and the independence of Azerbaijan, many attempts have been made to revive and modernize the Azerbaijani wine industry. Today vineyards are found in the foothills of the Caucasus Mountains and the Kur-Araz lowlands near the Kura River. In the 21st century, Ganja, Nagorno-Karabakh and Nakhchivan have emerged as centers of wine production in the region.

All content from Kiddle encyclopedia articles (including the article images and facts) can be freely used under Attribution-ShareAlike license, unless stated otherwise. Cite this article:
Azerbaijani wine Facts for Kids. Kiddle Encyclopedia.