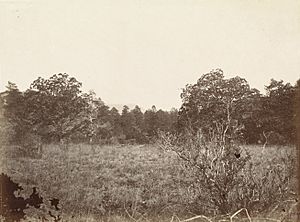 Aztec Pass was the route of the wagon toll road, known as the Hardyville - Prescott Road built by William Harrison Hardy in 1864, from his steamboat landing at Hardyville to new Arizona territorial capital of Prescott, through the Juniper and Santa Maria Mountains. The western entrance was the location of a campground known as Oaks and Willows on Muddy Wash. The eastern entrance of the road into the pass was the location of the Old Toll Gate 6 miles east of the summit. The toll gate was moved 3 miles eastward after Hardy improved the route through the pass. Camp Hualpai at 34°55′48.68″N 112°50′27.13″W﻿ / ﻿34.9301889°N 112.8408694°W﻿ / 34.9301889; -112.8408694 was built near that second tollgate along Walnut Creek where the road entered the pass from the south from Williamson Valley.

All content from Kiddle encyclopedia articles (including the article images and facts) can be freely used under Attribution-ShareAlike license, unless stated otherwise. Cite this article:
Aztec Pass Facts for Kids. Kiddle Encyclopedia.