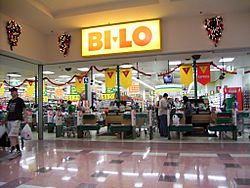 Bi-Lo was a supermarket with 214 shops all over Australia. It used to have shops in Western Australia called Newmart. It changed the names of all its stores to Coles Supermarkets in 2006 and 2007.

John Weekes started Bi-Lo towards the end of the 1970s in the city of Adelaide in South Australia with three shops. It was called Bi-Lo because it sells food and everyday articles at relatively cheap prices.

All content from Kiddle encyclopedia articles (including the article images and facts) can be freely used under Attribution-ShareAlike license, unless stated otherwise. Cite this article:
BI-LO (Australia) Facts for Kids. Kiddle Encyclopedia.