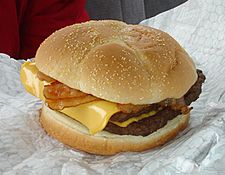 The Baconator is a sandwich made by Wendy's restaurants. It has two beef patties, two slices of American cheese, six strips of bacon, mayonnaise, and ketchup on a bun. It was introduced in April 2007. In 2009, Wendy's started offering two other versions of the Baconator: the Baconator Single (one patty) and the Baconator Triple (three patties). The original version is now called the Baconator Double.

All content from Kiddle encyclopedia articles (including the article images and facts) can be freely used under Attribution-ShareAlike license, unless stated otherwise. Cite this article:
Baconator Facts for Kids. Kiddle Encyclopedia.