Bad News for Outlaws is a 2009 children's book written by Vaunda Micheaux Nelson and illustrated by R. Gregory Christie, originally published by Lerner Publishing Group. It chronicles the life of Bass Reeves, a 19th-century black deputy marshal for the United States government who worked in the Arkansas and Oklahoma Territories.

Bad News for Outlaws chronicles the life of Bass Reeves, a black deputy marshal for the United States government who worked in the Arkansas and Oklahoma Territories for 32 years. Each page tells a different story about him, ranging from his youth in slavery to clever ways he brought wanted outlaws into custody, through the day he stopped working as a peace officer (when the territory reached statehood). The story ends with his death from Bright's disease. 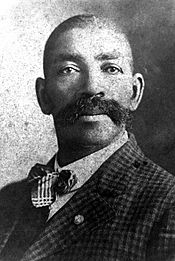 Nelson first heard about Bass Reeves through a documentary on blacks in the West that her husband Drew had found. The documentary made a small reference to Reeves, and Nelson researched his story. She consulted with Art T. Burton, a historian who has published on Reeves. Nelson reviewed drafts of illustrations for historical accuracy. In one case, the draft of the illustration of Reeves pulling a steer out of the mud showed him fully clothed, pulling the steer with a rope. Nelson gave the additional information that he went into the mud with the steer without his clothes, a fact which the final illustration reflects.

The book appeared on the National Endowment for the Humanities Nonfiction Booklist for Young Readers in 2014, and was an ALA Notable Children's Book in 2010. It won the 2010 Coretta Scott King Author Award, the New Mexico-Arizona Book Award, and the Once Upon a World Children's Book Award, both in 2010.

All content from Kiddle encyclopedia articles (including the article images and facts) can be freely used under Attribution-ShareAlike license, unless stated otherwise. Cite this article:
Bad News for Outlaws Facts for Kids. Kiddle Encyclopedia.