Bailey Fountain is an outdoor sculpture in New York City at the site of three 19th century fountains in Grand Army Plaza, Brooklyn, New York, United States. Renovated in 1956 and 2005-06, the 1932 fountain was funded by philanthropist Frank Bailey as a memorial to his wife. After 1974 thefts, some sculpture elements were stored for safekeeping.

Fountain of the Golden Spray 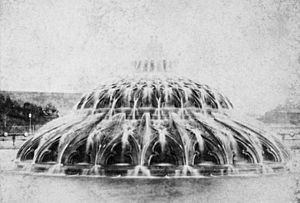 The Fountain of the Golden Spray of 1867 with a single jet of water was part of the 1867 Grand Army Plaza design.

The 1873 dome fountain by Calvert Vaux replaced the 1867 fountain with a two-tiered, double-domed structure of cast iron and molded sections of Beton Coignet. Gaslights in the 37.2 foot (11.4 m) diameter dome were visible through one of 24 colored glass windows for evening illumination. Additional gaslights mounted in the guardrail illuminated the surface of the pool. The Brooklyn Mayor criticized the water use of the fountain which could pump 60,000 gallons an hour, and by the 1890s the fountain leaked and was frequently dry. 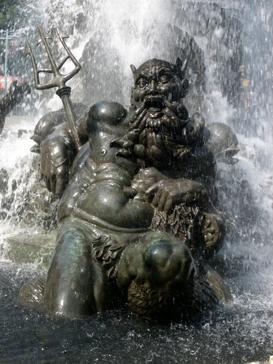 The 1897 Electric Fountain replaced the 1873 fountain and was controlled by 2 operators during scheduled night exhibitions on Wednesdays and Saturdays with audiences up to 30,000. A Brooklyn Park Commissioner's initial plan for a single spout was superseded by Fredric W. Darlington's design, which was presented in May 1897 to the Park Commission. Wilson & Baillie Manufacturing built the fountain, and the commission's "consulting engineer" was C. C. Martin. Landscape architect Frederick Law Olmsted placed the fountain at the intersection of two broad paths arranged as a Georgian cross within grassy, treeless plots at the quadrants. The "first exhibition" contracted for July 4, 1897, was delayed until August 7 and attended by "fully 100,000 people".

The 6,000 candela "automatic focusing arc lamps" were wired in 3 series circuits for dimming, could each be moved 2 ft (0.61 m) within "silver parabolic reflectors" to narrow or widen the 19 beams, and were positioned in concentric rings around a central light. The lights extended into glass cylinders protruding through the underwater ceiling and were each beamed through switchable disks of colored gels into water jets (there was also a lighted central geyser). The ~2,000 nozzles included umbrellas, ball sprays, wheat sheaves, rings, fans, funnels and whirligigs; with many of the nozzles around the lamp housings. An underground control room on the south of the basin allowed the lighting and hydraulics operators to view through three closely spaced windows in the basin wall 6 in (0.15 m) above the pool surface. A pump recirculated up to 100,000 gallons per hour from the pool in the 120-foot-diameter (37 m) basin. The fountain also had 88 incandescent lamps on the inner edge of the basin's concrete coping, and the Brooklyn Heights and the Nassau Electric railroads donated the electricity.

The 1915 construction of the New York City Subway's IRT Eastern Parkway Line (2, ​3, ​4, and ​5 train) and BMT Brighton Line (B and ​Q train) under the plaza left no room for the required infrastructure for the Electric Fountain, which was removed.

All content from Kiddle encyclopedia articles (including the article images and facts) can be freely used under Attribution-ShareAlike license, unless stated otherwise. Cite this article:
Bailey Fountain Facts for Kids. Kiddle Encyclopedia.