For the history of the four plaza fountains, see Bailey Fountain.

Originally, the grounds of the Grand Army Plaza was a battleground of the Battle of Long Island, which was the first major battle of the American Revolutionary War to take place after the promulgation of the United States Declaration of Independence.

The 1861 plan for Prospect Park included an elliptical plaza at the intersection of Flatbush and Ninth avenues. In 1867, the plaza was designed by Frederick Law Olmsted and Calvert Vaux as a grand entrance to the Park to separate the noisy city from the calm nature of the Park. Olmsted and Vaux's design included only the Fountain of the Golden Spray and the surrounding earth embankments covered in heavy plantings. The berms still shield the local apartment buildings and the main branch of the Brooklyn Public Library from the noisy traffic circle that has developed. By 1869 the Abraham Lincoln statue by Henry Kirke Brown was north of the plaza fountain's stairs, and the statue was moved to the lower terrace of the park's Concert Grove in 1895. 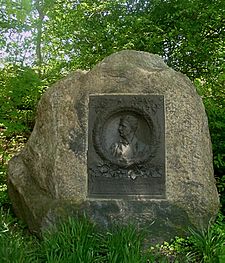 In 1895, three bronze sculpture groups were added to the 1892 Soldiers' and Sailors' Arch. When the New York City Subway's BMT Brighton Line (current B and ​Q train) was being built in the 1920s, it was hoped that a station could be built almost directly under the site of the Brooklyn Central Library, but the $1 to 3 million cost was too much.

In 1926, the plaza, previously known as Prospect Park Plaza, was renamed Grand Army Plaza to commemorate the sixtieth anniversary of the foundation of the Grand Army of the Republic, a fraternal organization composed of veterans of the Union Army and other military services who served in the American Civil War.

In 2008, a competition was held for designs to reorganize Grand Army Plaza to make it a more integral part of Prospect Park and more accessible to pedestrians. At the same time, the New York City Department of Transportation (NYCDOT) made improvements in accessibility, putting sidewalks and planters in many of the striped areas. These improvements made it somewhat easier and safer for pedestrians and cyclists to cross from the park to the library and to the plaza. The changes made by the NYCDOT were modest in comparison to those in the designs in the competition, most of which called for the rerouting of some of the vast traffic flow. 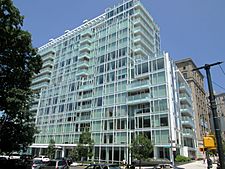 The area around the Arch forms the largest and busiest traffic circle in Brooklyn, being the convergence of Flatbush Avenue, Vanderbilt Avenue, Eastern Parkway, Prospect Park West, and Union Street. In 1927, Brooklyn's "Death-O-Meter", a sign admonishing drivers to "Slow Up" and displaying a continually updated tally of traffic accident deaths in the borough, was installed.

A popular farmer's market, part of the Greenmarket program of GrowNYC is held on the plaza in front of Prospect Park every Saturday from 8 a.m. to 4 p.m..

The station is served by two New York City Subway stations and multiple bus routes. The Grand Army Plaza station (2​ and ​3 train), built in 1920 on the IRT Eastern Parkway Line, is on the north end of the Plaza, while the Seventh Avenue station (B and ​Q train) on the BMT Brighton Line is several blocks northwest. The B67, B69 buses stop at Union Street and 7th Avenue, two blocks north, while the B41 bus stops on Flatbush Avenue.

A private funding campaign in 1999 was established to restore the monument. In 2018, keystones from the roof fell and protective barriers were placed around the monument to safeguard pedestrians. A full restoration of the arch and statue is set for 2021, sponsored by the City and Prospect Park Alliance.

All content from Kiddle encyclopedia articles (including the article images and facts) can be freely used under Attribution-ShareAlike license, unless stated otherwise. Cite this article:
Grand Army Plaza Facts for Kids. Kiddle Encyclopedia.