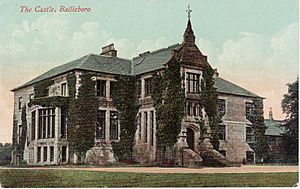 Bailieborough Castle was located in Bailieborough, County Cavan, Ireland. It was built in an enclosed demesne by 1629. Also known as Castle House, Lisgar House, or simply 'The Castle', the country house was located just to the south-west of Castle Lough in what is now known as Bailieborough Demesne, on the north-western edge of the town. It is now totally demolished.

Castle Lake loop is a 3-kilometre (1.9 mi) hiking trail around part of the former castle's property.

William Bailie, a Scottish "undertaker" or Planter, was granted the lands of Tonergie (Tandragee) in East Breffnie by James I in 1610 on condition he enclosed a demesne, built a fortified house and settled on the estate a number of Scottish or English families. This he did by 1629. During the rising of 1641 the house was attacked and occupied for a month by a troop of Irish soldiers under Colonel Hugh O’Reilly.

William died c.1648 and the estate passed to his son, William, the Bishop of Clonfert and Kilmacduagh. On the bishop's death in 1664 the estate was inherited by his only daughter Jane, who had married James Hamilton. James was succeeded by his son Henry, the M.P. for Cavan who was killed at the siege of Limerick during the Jacobite war. His successor was his son, another James Hamilton, who sold the property in 1724 to Major Charles Stewart - nephew and co-heir of General William Steuart - and left the area.

Colonel Young laid out the town of Bailieborough in its present location and was made 1st Baronet Young of Bailieborough in 1821. He died in 1835 and was succeeded by his son John Young, 1st Baron Lisgar, who was at one time Chief Secretary for Ireland and, at a later date, Governor General of Canada. He was made 1st Baron Lisgar in 1870 and in his retirement renovated the house. After Lady Lisgar's death in 1895 the estate went into Chancery and some of the land was sold to the tenants under the Ashbourne Act.

The house itself was sold to Sir Stanley Cochrane, who later sold it to one of his nephews, the late Mr. W.L.B. Cochrane, a Bailieborough solicitor. The bulk of the land was sold in 1910 to the Forestry Division of the Department of Lands. In 1915 the house and the remaining 100 acres of land were sold to a religious order, the Marist Brothers of Athlone. Several of the brothers lie buried in a walled enclosure in the vicinity. In 1918 the house burnt down and although the brothers continued in a rebuilt section until 1936, they then decided to sell the house to the Department of Lands and leave. The house was demolished soon after.

All content from Kiddle encyclopedia articles (including the article images and facts) can be freely used under Attribution-ShareAlike license, unless stated otherwise. Cite this article:
Bailieborough Castle Facts for Kids. Kiddle Encyclopedia.