Bakot is one of the 51 Union Councils of Abbottabad District in the Khyber Pakhtunkhwa province of Pakistan.

Bakot was badly affected by the 2005 Pakistan earthquake, as the place where the earthquake happened was nearby. 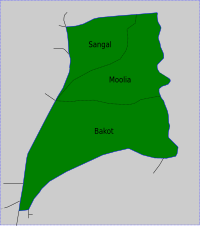 Bakot is in the east of Abbottabad District and is next to the Muzaffarabad and Bagh districts of Kashmir. It is also next the following Union Councils within Abbottabad District: to the north by Nambal, to the south by Berote Kalan and to the west by Phalkot, Namli Maira, Nagri Bala.

All content from Kiddle encyclopedia articles (including the article images and facts) can be freely used under Attribution-ShareAlike license, unless stated otherwise. Cite this article:
Bakot Facts for Kids. Kiddle Encyclopedia.