Baldoon Castle was a 16th-century castle about 1.5 miles (2.4 km) south west of Wigtown, Dumfries and Galloway, Scotland, south of the river Bladnoch.

The Dunbars of Westfield owned the property for almost three centuries from 1533-4. It was a gift from King James V to Archibald Duncan.

Little remains of the castle: only a length of the south wall with the springing of at least three walls on its north face, and the remains of an entrance gateway lying 50 metres (160 ft) to the north. The gateway dates from the 17th century, and are described as a good example of Renaissance work. 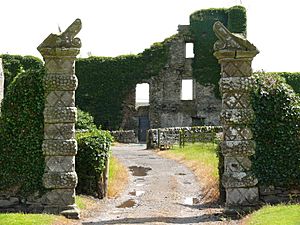 The gate piers which were part of the entrance to the castle with bands of stylised rock-faced rustication alternating with lozenges. They are topped by cornices and moulded scroll caps.

The gate piers are registered as a Category A Listed Building.

It is said that the ghost of Janet Dalrymple of Carscreugh haunts the ruin.

All content from Kiddle encyclopedia articles (including the article images and facts) can be freely used under Attribution-ShareAlike license, unless stated otherwise. Cite this article:
Baldoon Castle Facts for Kids. Kiddle Encyclopedia.