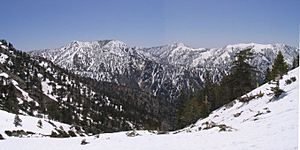 Winter looking towards the bottom of Baldy Bowl 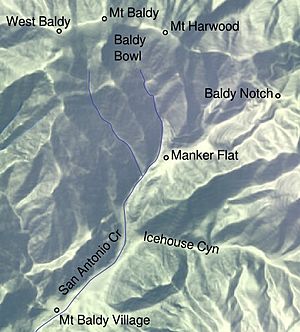 Baldy Bowl is a fluvial cirque, in the San Gabriel Mountains of the U.S. state of California, that forms much of the upper south face of Mount San Antonio. It is one of the most visited backcountry locales in the San Gabriels, and is popular with skiers, hikers, and climbers. It has a base elevation of around 8,200 ft (2,500 m).

The bowl is a small cirque, about 0.5 miles (0.80 km) wide. It is formed by San Antonio Creek, which cascades down the south face of Mount San Antonio. It is dominated by a massive fell field, dotted by some isolated trees.

A technical climb of Mount San Antonio involves climbing up the face of Baldy Bowl. This is a straightforward ice climb during the winter, and a difficult scramble during the summer. Avalanches have been known to occur at Baldy Bowl.

All content from Kiddle encyclopedia articles (including the article images and facts) can be freely used under Attribution-ShareAlike license, unless stated otherwise. Cite this article:
Baldy Bowl Facts for Kids. Kiddle Encyclopedia.