A ballast tamper is a machine used to make railway tracks level. It is like the railway version of a road roller but instead of only squashing the high parts, it also lifts the track out of dips. 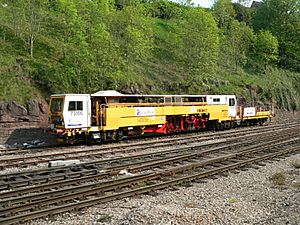 Before tamping machines were made, tamping was done by lots of people with shovels. The machines make tamping quicker and the track is more level than if tamping is done by hand. Also, some new tracks and sleepers are too heavy to be lifted by hand, so a tamper has to be used.

New tampers can also move the track from side to side to make it smoother.

All content from Kiddle encyclopedia articles (including the article images and facts) can be freely used under Attribution-ShareAlike license, unless stated otherwise. Cite this article:
Ballast tamper Facts for Kids. Kiddle Encyclopedia.