The Ballymaloe Cookery School (BA-lee-MA-loo) is a privately run cookery school in Shanagarry, County Cork, Ireland, that was opened in 1983. It is run by Darina Allen, a celebrity chef, cookery book author and pioneer of the slow food movement in Ireland. The school is located within the grounds of an organic farm. 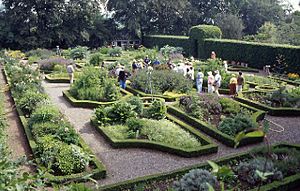 Myrtle Allen and her husband Ivan bought Ballymaloe House in 1948, and opened it as a restaurant in 1964. In 1968, Darina O'Connell joined them and taught and cooked for several years. In 1975, Myrtle Allen became the first Irish woman to receive a Michelin Star, which she held for five years.

Darina married the Allen's son Tim, and (together with her brother Rory O'Connell) started the Ballymaloe Cooking School in nearby Kinoith in 1983. Ballymaloe Cookery School is located approximately 4 km from Ballymaloe House.

Celebrity chef Rachel Allen also has a connection to Ballymaloe.

All content from Kiddle encyclopedia articles (including the article images and facts) can be freely used under Attribution-ShareAlike license, unless stated otherwise. Cite this article:
Ballymaloe Cookery School Facts for Kids. Kiddle Encyclopedia.